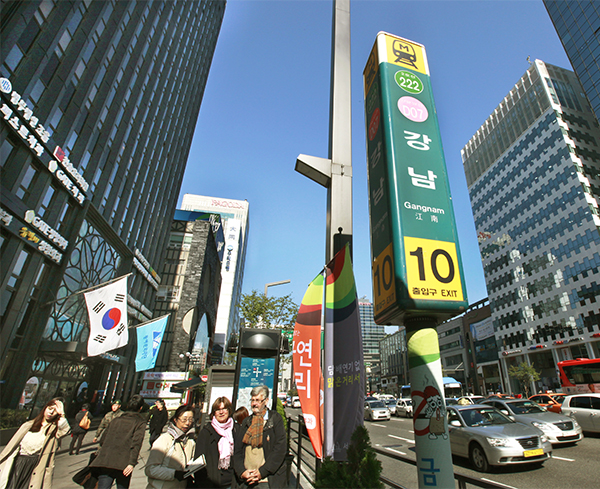 Gangnam District has seen an influx of foreign visitors thanks to “Gangnam Style.” The music video by Psy has become a worldwide sensation. By Park Sang-moon


In Korean, Gangnam means “south of the river.” That’s probably more than the millions upon millions of people around the world saying oppa and doing the horse dance know about the place Psy made famous.

But long before “Gangnam Style” became a global phenomenon, the district in southern Seoul was well known in Korea. It has been a regular presence in television shows, movies and literature, and is a symbol of the miraculous material success the country has achieved.

Not bad for a piece of land that was little more than rice paddies just 40 years ago. 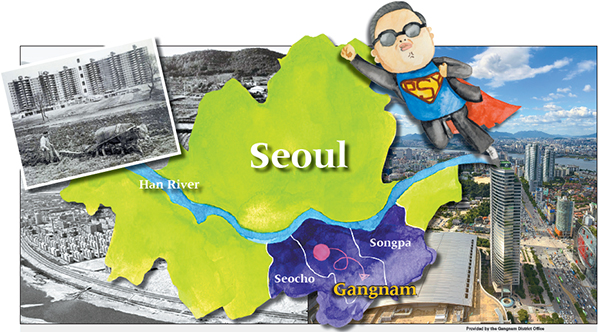 Gangnam is one of 11 districts south of the Han River, and when Koreans refer to Gangnam, they usually include two neighboring districts - Seocho and Songpa. Taken together, this “Greater Gangnam” accounts for 15 percent of Seoul’s population.

Gangnam is widely considered a mecca of education, business, shopping and medicine, a place where boys own BMWs and girls are pretty.

It is an image of the district portrayed in some Korean television dramas.

Leaning against a guardrail on a bridge, a couple is making a life-changing decision.

Their niece lives in Gangnam, and she has received a Toefl score of 110 out of 120 and devoured half of Harvard University’s reading list. With the help of expensive private tutoring, she has entered a prestigious middle school.

The couple on the bridge decide to move to Daechi-dong, Gangnam, so their son will have the same opportunities.

They sell their house, rent a modest room in the wealthy neighborhood and struggle to get their son admitted to the highly selective school, just like their niece. At one point, they consider private tutoring to get their son into an upper-level hagwon class.

That is the story line of the TV series “A Wife’s Credentials” broadcast by JTBC earlier this year. It was the latest in a string of dramas set in Gangnam.

“A Wife’s Credentials,” like most TV shows, films and novels, treats Gangnam not as a flashy area of affluence-flaunting, but as a symbol of the relentless pursuit of success and materialistic value in Korea’s hypercompetitive society.

In the 2007 SBS drama “Catching Up with Gangnam Moms,” zealous mothers act more like bodyguards. They are all out to manage the daily study schedules of their children and recruit ever-more-qualified private tutors in order to get their kids into an elite high school.

Some might argue that the series’ depiction of the affluent district and its residents could be exaggerated for dramatic effect, but the writer of “Catching Up with Gangnam Moms” says it doesn’t lose touch with the reality.

“My drama shows middle school students competing with each other to get into an elite high school. But in reality, the competition starts when kids attend elementary school to get admission to a handful of well-known international middle schools,” Kim Hyun-hee said in an interview with Yonhap News Agency. “The characters in the drama are based on people surrounding me, too,” she added.

Not all television shows take such a serious approach. Some add a satirical twist on people’s desire for money and mock their shallowness.

“I Live in Cheongdam-dong,” a daily sitcom that aired from last December through August on JTBC, revolves around a family moving to Cheongdam-dong in Gangnam hoping to improve their lives just by being near the wealthy. Hye-ja, who resides in a worn-down boarding room in the middle of the rich neighborhood, accidentally walks into a meeting of VIP club members at an upscale department store and is mistaken for a wealthy matron.

Hilarity ensues, as the main character pretends to be a woman of means hanging out with neighbors living lavish lifestyles.

On the silver screen, this year’s hit movie “Architecture 101”stars a character who begs his mother to move to Gangnam after finding out that his love interest has feelings for a “Gangnam man” from an affluent family.

Director Yun Jong-bin’s “Beastie Boys” delves more explicitly into how the swanky area serves as an outlet for human desire by exploring male hosts who serve female clients in discreet salons tucked throughout the district.

“The film depicts youths living in the exotic, affluent backdrop of Gangnam and those kicking and screaming to survive in the superficial, capitalistic society,” the director said.

In the Korean literary arena, the prosperous district has such a distinctive standing that Kim Mi-hyun, a critic and professor of Korean literature at Ewha Womans University, coined the term “Gangnam literary.” It refers to a subgenre of literature that deals with materialism and the vanity of the super-rich through the lens of Gangnam area residents, according to Kim.

Hwang Sok-yong, one of Korea’s most acclaimed writers, chronicles Gangnam’s state-led transformation from rice paddies to a home of multinational corporations and high-end luxury brands in his novel “Gangnam-Mong.” Mong means dream.

The redevelopment project, which began in the 1970s, largely went hand in hand with Korea’s modernization efforts to rebuild a war-torn, impoverished country into a modern economic powerhouse.

All of the characters in Hwang’s novel strive to become Gangnam residents in their own individual - if not always admirable - ways. For money, Park Seon-nyeo becomes the mistress of a wealthy man, while other characters turn to extortion.

They and their desperate efforts to become a part of Gangnam life are crushed by the collapse of Samgpoong Department Store. The store actually crashed due to structure failure in 1995, leaving about 1,000 people injured and 500 dead.

Other books and films explore the disappointments of those who do make it to Gangnam.

Lee Hong presents a gritty take on the dream district in her book “Christmas Picnic.”

Three siblings - Eun-young, Eun-bi and Eun-jae - move into the Hanyang Apartment Complex in Apgujeong-dong, Gangnam, an upscale high-rise that really exists, after winning the lottery.

They all dreamed of a rosy future, where they mingle with the nouveaux riches of the coveted address who raked in a great amount of wealth largely due to skyrocketing real estate values. But as outsiders, they soon find it hard to be accepted into the community. Eun-young goes so far as to prostitute herself to older men to maintain the family’s lavish lifestyle.

Born and raised in the area, Lee may well be the one who is best able to capture people’s desire to be accepted in Gangnam against the backdrop of the exclusive culture there.

“Gangnam is the place that highlights both the glitzy extravaganza and dark drawbacks of the capitalized society that puts great importance on money,” Lee said.

In fact, Gangnam was the least developed district in Seoul prior to the 1970s. Most of the area was rice paddies.

Gangnam experienced rapid development in the 1970s to become the icon of the economic miracle on the Han. Most residents in the district benefited from a sudden surge in real estate prices as a result of the government’s economic development plan for the area.

Originally, the area was part of Gyeonggi, but was incorporated into Seoul’s Seongdong District in 1963. In the1970s, the Gangnam area was established, and until 1988, it included what today is Seocho District.

In 1960s, roads and bridges were established, providing the infrastructure necessary for the area’s growth to take off. By the 1970s, apartment complexes were rising from the rural fields that surrounded them; today, those apartment complexes are dwarfed by sleek modern high-rises.

Meanwhile, the three-district Greater Gangnam of today began to take shape about the time of the 1988 Olympic Games, which served as an engine of even more rapid urbanization. All of a sudden, there were Olympic stadiums in Songpa District. The Trade Tower, which appears in the background of Psy’s music video when he does his horse galloping dance on top of the Asem Building, was built in 1988, and it remains one of Korea’s tallest buildings. Both the Asem Building and the Trade Tower are part of World Trade Center Seoul, known as COEX.

Seoul is already known for expensive home prices. According to research done by Realty Bank, a real estate portal site, people can purchase four houses outside the capital city for the price of one in Seoul. As of this month, the average apartment costs about 16.38 million won ($15,000) per 3.3 square meters (35.5 square feet), but the average price in Gangnam is 29.59 million won.

In such a luxurious part of the capital, longtime Gangnam residents who have remained in the district and not taken advantage of the skyrocketing real estate must feel more deprived by the day.

According research by the Gangnam District Office in May, a total of 5,309 households, or 9,360 people, in Gangnam were receiving basic living subsidies from the government.

“If I say I live in Cheongdam-dong, people instantly scan me from head to toe with a puzzled face, probably thinking that I don’t belong there,” says a 24-year-old woman surnamed Hur, who claims she is from a lower-income family.

Hur says she felt an ever greater sense of deprivation attending elementary to high school in Cheongdam-dong, “feeling neglected among children from rich families carrying designer bags and getting dropped off in front of the school in Mercedes-Benzes.”

* This is the first in a three-part series about what Gangnam used to be and what it has become.