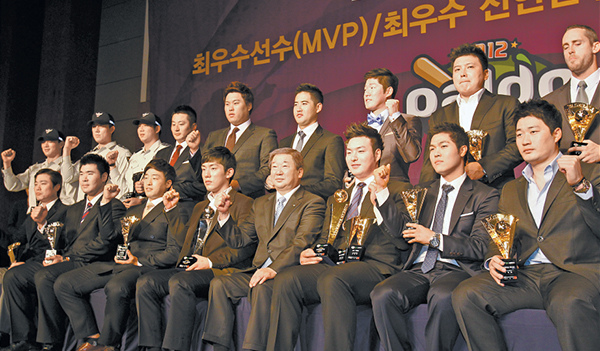 The recipients of the 2012 Korea Baseball Organization awards pose during the ceremony held in Samseong-dong, southern Seoul, yesterday. Park Byung-ho, third from the right in the front row, the first baseman of the Nexen Heroes, was voted as the Most Valuable Player of the season with 73 of 91 votes cast by the KBO-registered press corps. Samsung Lions starter Jang Won-sam, who led the KBO with 17 wins, was a distant second with eight votes. Park, 26, led the league with 31 home runs, 105 RBI and a .561 slugging percentage and played every game in the 133-game season. Seo Geon-chang, fifth from the right in the front row, Park’s Nexen teammate, grabbed the Rookie of the Year award in a landslide with 79 of the 91 votes. The 23-year-old second baseman led all rookies with 39 steals and 115 hits in 127 games, and had more triples than anyone this year with 10. In the KBO’s 31-year history, Park is the third player to win the MVP award while playing for a team that didn’t make the postseason. Park and Seo are just the fourth pair of teammates to win the MVP and the Rookie of the Year awards in the same season. The Golden Glove awards ceremony is to be held next month. By Kim Min-kyu