43-year-old to pitch again in Korea

43-year-old to pitch again in Korea 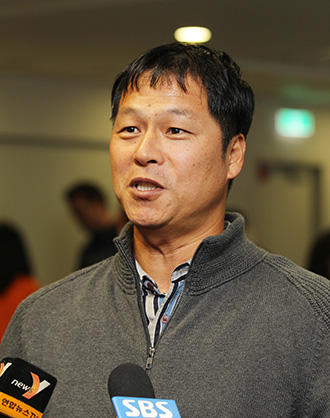 Koo Dae-sung, a Korean pitcher representing an Australian club during a continental baseball tournament in Busan this week, said yesterday he hopes to keep playing as long as his body can hold up.

Koo, 43, has traveled with the Perth Heat, the reigning champions of the Australian Baseball League (ABL), for the Asia Series tournament in Korea. Set for Thursday to Sunday this week, the event will bring together league champions and All-Stars from Korea, Japan, Taiwan, China and Australia.

Though Koo plays for a different club, the Sydney Blue Sox, the ABL made a special arrangement to put Koo on the Heat roster. The move was designed to help raise the profile of baseball Down Under and strengthen the Heat’s pitching staff.

Koo will be making his first appearance on home soil since his retirement from the Hanwha Eagles of the Korea Baseball Organization in 2010. Speaking at the Australian Embassy’s reception of the Heat players and ABL officials, Koo said he was looking forward to the opportunity.

“I am thrilled to be pitching again in Korea,” Koo said. “I am still an active player, so in some ways, it doesn’t feel any more special [than a regular outing]. I will just go out there and throw.”

Koo, once a hard-throwing lefty who could start and close games, admitted his velocity is only at about “30 to 40 percent” of what it used to be. That won’t prevent him from staying in the game, he said.

“I will keep playing as long as I physically can,” the ageless wonder said. “I’ve blown only one save over my two years in Australia.”

The ABL season goes from November to February, with teams playing only 45 games. Koo said he has been playing in smaller local leagues during the offseason to stay in shape, and credited his extra work with helping him sustain his level of play.

Koo has enjoyed two solid seasons in the ABL. In his first season with the Blue Sox in 2010-11, Koo notched 12 saves with a 1.00 earned run average to earn the Reliever of the Year honors. The following season, he had a league-leading eight saves.

Koo has also played for the New York Mets in Major League Baseball (MLB) in 2005 and the Orix BlueWave in Japan’s Nippon Professional Baseball (NPB) from 2001 to 2004. Koo is the first Korean to play in the KBO, MLB and NPB.