Who dat? New Orleans Saints, Brees back in style

Who dat? New Orleans Saints, Brees back in style 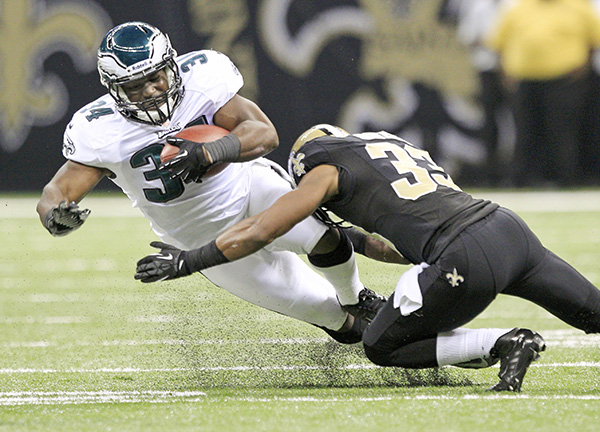 
NEW ORLEANS - Drew Brees and the New Orleans Saints are having fun again. They hope it’s a sign of things to come in the second half of the season.

Michael Vick kept picking himself up off the Superdome turf, the recipient of an awful beating.

The Philadelphia Eagles are down - and nearly out.

Brees threw two touchdown passes, extending his NFL record streak to 51 games, and Patrick Robinson returned an interception 99 yards for a score to lead the Saints past the reeling Eagles 28-13 Monday night.

“There are defining moments throughout a season,” Brees said. “Big plays, big wins, that kind of bring you together and let you see a vision of what you can be, what you can accomplish. Here we are [at] the midway point. It’s gone by fast.

“This,” he added, “is the type of momentum we want going into the second half of the season.”

The Eagles (3-5) lost their fourth straight, which is sure to keep the heat on Vick and embattled coach Andy Reid. Vick threw a 77-yard touchdown pass to DeSean Jackson in the third quarter, but that was about the only highlight for the visiting team.

“It’s very frustrating,” Vick said. “These are games that we have the opportunity to win, or get back in the game. At this point, everything has to be dead on. You can’t miss, and you almost have to be perfect on every drive.”

Philadelphia was far from perfect, but sure had plenty of chances. Four times, the Eagles were staring at first-and-goal, but only managed two field goals by Alex Henery.