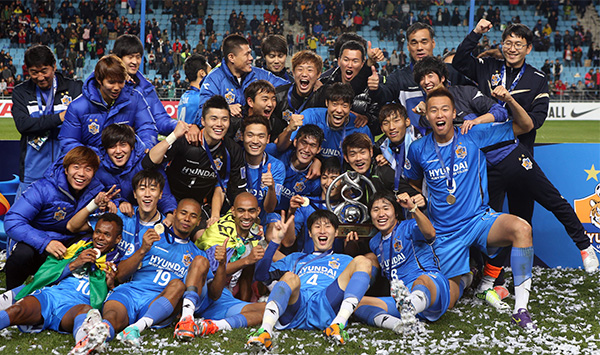 Players and coaches of Ulsan Hyundai celebrate after winning the club’s first AFC Champions League title against Saudi Arabia’s Al Ahli in Ulsan on Saturday night. Ulsan cruised to a 3-0 win and qualified for the FIFA Club World Cup.[YONHAP]

Kwak Tae-hwi, Rafinha and Kim Seung-yong scored for the Korean side, sending the sold-out home crowd at Ulsan Munsu Stadium into a thunderous frenzy. It was the club’s maiden Champions League title and the third by a Korean team in four years.

Fans can now shift their attention to the club’s next tasks at hand, including an upcoming intercontinental competition where they may face off against Chelsea, the current titleholder of the UEFA Champions League.

With the AFC CL title, Ulsan has secured a berth to the quarterfinals of the Club World Cup that will start in Japan next month.

Ulsan will play against Mexican club Monterrey, the winner of the Concacaf Champions League, on Dec. 9 in Toyota. The winners of the match will meet Chelsea in the semifinal.

Ulsan coach Kim Ho-gon, who managed the team during its undefeated run in the 12-game campaign, knows the Club World Cup is on a different level than the AFC tournament.

“It is true that an Asian club lags behind the world-class football teams,” Kim told reporters after Saturday’s final.

Kim, however, said the team will do its best with their standing as an Asian representative in mind.

Ulsan is the fourth K-League club in four years to make it to the ACL final and second club to win it in three years after the Seongnam Chunma in 2010. The Pohang Steelers won the title in 2009 while the Jeonbuk Motors finished runners-up last year.

“We will get prepared well and try to enhance the status of Korean football,” Kim said.

To continue its international success, the club now needs to pick it up in the K-League. There is no automatic berth given to the winner of the ACL, and Ulsan has to lift its standing in the six remaining domestic league matches to be able to defend its Asian title.

There are three automatic Asian berths reserved for the three best K-League clubs and Ulsan, with 16 victories, 11 losses and 11 draws, is in fifth place. The fourth-place Steelers have already secured another berth as the winner of the FA Cup, and Ulsan will have to catch up with the fourth-place Suwon Bluewings, who are eight points ahead.

Ulsan has sacrificed many games in its K-League schedule for the ACL campaign. The club has only won once since the second half of the season began, a 2-1 victory over Gyeongnam FC on Sept. 15. It has lost four and drawn two in the last six matches.

The momentum could prove hard to carry over to the domestic league as their upcoming opponent is league-leading FC Seoul, 22 points ahead.

Some of their best players, strikers Kim Shin-wook and Lee Keun-ho, as well as goalkeeper Kim Young-kwang, will also miss the Seoul match on Thursday because of the national team’s tune-up match against Australia on Wednesday.

“Since the Seoul match on Nov. 15, we will mobilize our best members for the K-League matches,” coach Kim said.

Ulsan never lost - the club won 10 times and drew twice - on its way to the AFC CL title, getting past strong opponents such as Al Hilal of Saudi Arabia and Bunyodkor of Uzbekistan en route.

Coach Kim, who led the Korean Olympic team to the quarterfinals in the 2004 Athens Games, said the victory is his happiest in his more than 30-year coaching career.

“I will never forget this,” Kim said.