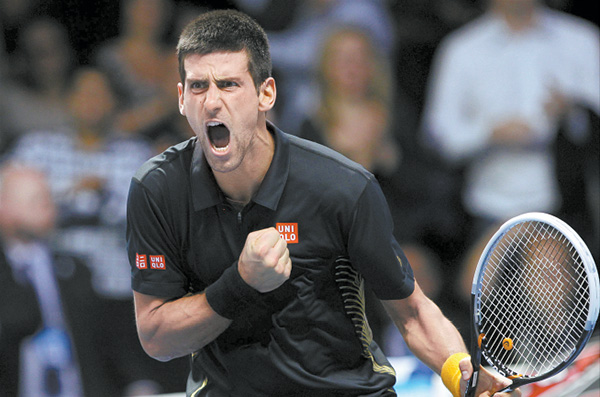 
LONDON - The world’s top three players all scaled dizzy heights in 2012, but Novak Djokovic ended the year staring down at his rivals after grinding down Roger Federer to win the ATP World Tour Finals title in brutal fashion at London’s O2 Arena on Monday.

The 25-year-old shed sweat and blood before dethroning Federer 7-6, 7-5 in a showdown that provided a memorable climax to an incredible men’s season.

Since winning a fifth grand slam title at the Australian Open in a near six-hour epic against Rafa Nadal back in January, Djokovic’s reign has come under attack from both Federer and Britain’s Andy Murray, but after beating both in London he is clearly still the dominant force going into 2013.

World No. 2 Federer has been all but unbeatable in the tournament since it switched to London in 2009 and was seeking a hat-trick of titles at the eye-catching Thames-side dome.

With the majority of the 17,000 crowd cheering for the Swiss maestro he forged healthy leads in both sets with some typical brilliance but was eventually stopped in his tracks by the Serb.

Djokovic, who had lost his last two meetings with the 17-times grand slam champion and trailed 16-12 in career meetings dating back to 2006, found himself 3-0 down after eight minutes and then faced a 5-3 deficit in the second.

Both times Djokovic dug deep, reeled in the Swiss stylist, then hammered him into submission to seal victory in two hours and 14 minutes.

“I’ve experienced his aggressivity [sic] before, really trying to make his mark on the match,” Djokovic told reporters.

“I tried to convince myself that I will turn it around and fight. It happened again. I managed to deliver my best when I needed it most.”

It was his first title at the ATP’s blue riband event since 2008 in Shanghai and with it came the $1.76 million jackpot for going through the elite tournament with a 100 percent record having won all his round-robin matches.

For 31-year-old Federer, who claimed his seventh Wimbledon title this year and temporarily dislodged Djokovic from the No. 1 spot to break Pete Sampras’s record of 286 weeks at the top of the rankings, there was frustration but few regrets.

“You have to get over the finish line in the set and then obviously in the match,” Federer, who also reached the Olympic singles final where he was beaten by Andy Murray, told reporters. “He was better at that today.

“It was great intensity, a good crowd. So it was fun playing. I think it’s been a fantastic season to be part of.”