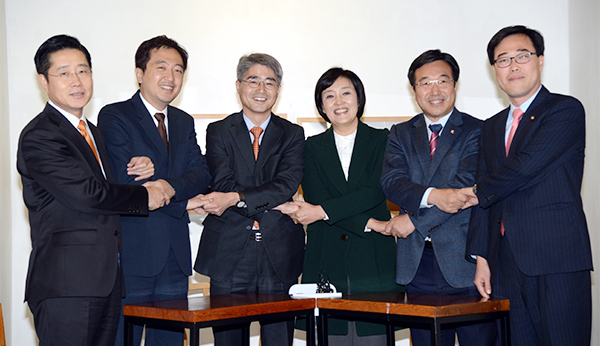 Six negotiators from both the Moon Jae-in and Ahn Cheol-soo campaigns convene yesterday in Tongui-dong, Jongno District, central Seoul, to decide on how to field a candidate. Ahn’s camp emphasized that they will work to iron out rules to field a single candidate who can win the presidential election, while Moon’s camp articulated that they want to come up with rules that will ensure the general public participates in selecting the unified candidate. From left, Lee Tae-gyu, Keum Tae-sup and Cho Kwang-hui from Ahn’s camp, Park Young-sun, Yun Ho-jung and Kim Ki-sik from Moon’s camp. [Joint Press Corps]