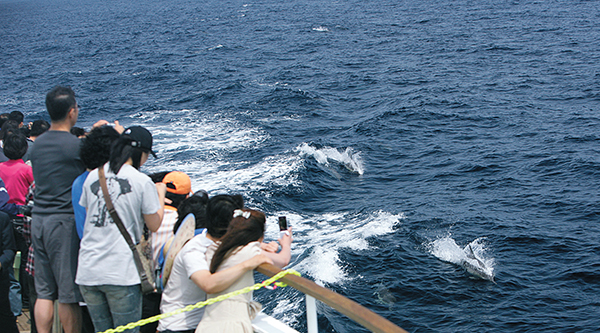 Tourists watch a pod of whales in the sea near Ulsan. Provided by Nam District Office of Ulsan

After 3 to 4 hours at sea, the sailors arrive back at port with two or three 18-meter (59-foot) right whales, an endangered baleen whale species.

The whales’ weight is measured by retailers under the whaling association who pay over 10 million won ($9,168), an amount worth about 100 billion won today.

At home, these sailors boast black-and-white television sets, rare in those days, telephones and Japan-imported wristwatches.

Such was the life of Ulsan whalers in the 1970s.

Lee Man-woo, 54, head of a whale culture preservation association, said, “Like the saying, ‘even the neighborhood dog walks around with 10,000 won in his mouth,’ Jangsaengpo was that well-off and crowded with people back then.”

“Whalers at that time earned a monthly income of what is worth 10 million won nowadays,” Lee added. 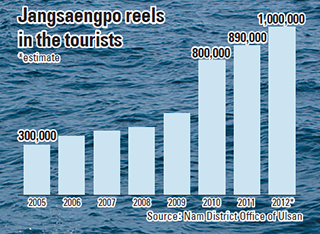 But the thriving and prosperous Jangsaengpo began to decline in 1986 after the government banned whaling, its main money earner. The 27 whaling ships in the port were auctioned off at low prices over the course of a year, and the whalers, deprived of their livelihood, left the area.

It took three decades for the Jangsaengpo revitalization to come about as Ulsan’s Nam District pumped in 6.5 billion won to transform the ghost port into a center of whale tourism.

The four-story Jangsaengpo Whale Museum opened in May 2005. It displays artifacts and photographs from whaling, including the skeleton of a 12.4-meter killer whale.

As interest grew, the district invested another 7.2 billion won in 2008 to add a three-story, 2,611-square-meter “Whale Experience Building” extension to the museum.

Starting in 2009, visitors for the first time in the country’s history could go whale-watching in the Ulsan waters on a 262-ton vessel.

Tourism officials say a whale can be spotted on one out of four trips.

And the results began to show. Prior to the efforts, there were rarely any whale tourists.

Likewise, the whale tourism industry grew six-fold from 1 billion won in 2005 to 6.6 billion won in 2011. In 2008, the Ministry of Knowledge Economy declared Jangsaengpo an exclusive whale zone.

The once-abandoned Jangsaengpo port now has some 240 stores, including whale-themed restaurants, souvenir shops and even bakeries, and 1,157 residents.

Kim Bok-geun, in charge of whale tourism at the Nam District Office, said, “The success of Jangsaengpo is the ‘whale-themed’ tourist attractions.

“Building whale-related facilities as the only whale center in the country worked out well.”

The city expects whale tourism to continue to boom. The district will spend another 15.8 billion won on building a 164-square-meter boardwalk along the port.