U-19 squad heads to AFC finals

U-19 squad heads to AFC finals 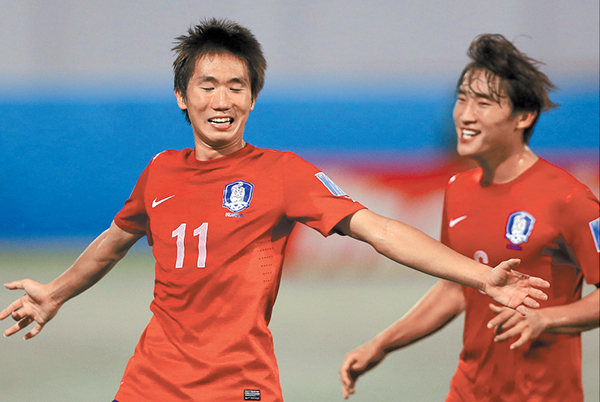 Kang Sang-woo, left, celebrates after scoring a goal during the AFC U-19 Championship semifinal at Emirates Stadium in Ras al-Khaimah, United Arab Emirates, on Wednesday. Korea beat Uzbekistan 3-1 to advance to the finals.[AFP/YONHAP]


Korea has won the Asian Football Confederation U-19 Championship 11 times, making it the most successful nation in the region in the international tournament, and now the young Taegeuk Warriors are zeroing in on a 12th title.

Korea, managed by coach Lee Kwang-jong, beat Uzbekistan 3-1 in the semifinal match of the U-19 Championship on Wednesday to set up a final showdown with Iraq, who advanced after beating Australia 2-0.

Since the event was launched in 1959, Korea has won the prestigious championship the most times, earning four more titles than the runner-up Myanmar, who hasn’t taken the tournament since 1970.

Korea is seeking its first title in eight years after winning the 2004 event in Malaysia.

Iraq has won five times, most recently in 2000 in Iran.

Korea and Iraq have already met in the tournament this year, both placed in Group B in the previous stage along with Thailand and China. The Korea-Iraq match ended in a scoreless draw.

Iraq finished first in the group with two wins and one draw, with Korea behind on goal differential.

Iraq defeated Japan 2-1 in the quarterfinals.

The Iraq-Australia semifinal was held after the Korea-Uzbekistan match and Lee told the AFC Web site that he is happy to meet Iraq in the final to make use of his knowledge of the Middle Eastern team.

In an interview with Yonhap News Agency yesterday, Lee said that he believed that his side showed a better performance than Iraq in the group stage contest and is confident the team will show “good results” tomorrow night.

Korea got on the scoreboard first in the 51st minute when defender Woo Ju-sung connected with a Kim Sun-woo corner kick for a goal by Ryu Seung-woo.

Moon Chang-jin extended the lead 10 minutes later, scoring on a penalty earned by Kang Sang-woo, before Igor Sergeev reduced the deficit in the 66th minute.

Kim Hyun held off Uzbekistan’s chase with a header in the 78th minute.

“You can see we were struggling to get goals at the beginning of the tournament but now the boys are scoring for fun,” Lee told the AFC Web site after the match.

Korea routed Iran 4-1 in the quarterfinals after ending up with only three goals in the group stage.

“We worked very hard in training to make things right and now we are reaping the rewards.”

“We were defeated by a superior side - they were too good for us,” Musaev told the AFC Web site.

“We had the strategy of counterattack football but they never let our wing players move in the match. The Koreans were excellent today.”