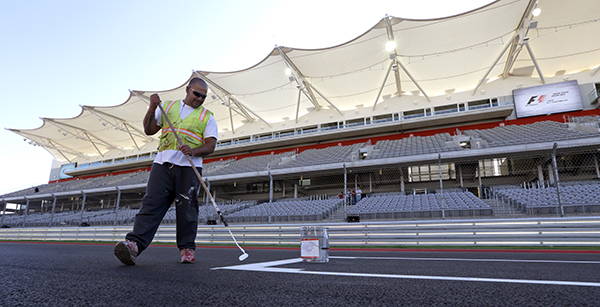 John Mojica paints the race track at the Circuit of the Americas, Wednesday, in Austin, Texas. Formula One’s U.S. Grand Prix auto race is scheduled for this weekend at the site. [AP/YONHAP]


AUSTIN, Texas - Formula One, the world’s most popular motorsport, is trying once again to conquer its final frontier: the United States. This time, the Europeans aim to make it stick.

The glitzy sport with ultra-fast cars and a flair for the exotic has landed deep in the heart of Texas, of all places, with a gleaming new track, a down-to-the-wire championship race and hope that it can grab the attention of American race fans who rarely look up from the Nascar standings.

The U.S. Grand Prix makes its grand return after a five-year absence on Sunday at the $400 million Circuit of the Americas, a course built expressly for F1 on rolling scrub land just a few miles southeast of downtown Austin.

“This is what was needed,’’ said Mario Andretti, the Formula One champion in 1978. “Now we can compete with the rest of the world and some of those new venues that have gone up in the last few years in the Middle East and Asia. That’s the ingredient that was missing here in the United States.’’

Austin is the 10th American city to host F1 since the first U.S. Grand Prix in Sebring, Florida, in 1959. Watkins Glen, New York, hosted a Grand Prix from 1961-80 and other F1 races have been held in Long Beach, Las Vegas, Detroit, Dallas, Phoenix and other cities on street courses.

As Nascar grew into the dominant motorsport in the U.S., demand and interest for open-wheel racing took a hit and F1 didn’t even race in the U.S. from 1992-99 before making its return at Indianapolis Motor Speedway, the cradle of American racing. Even there, it couldn’t last and track officials and Formula One boss Bernie Ecclestone parted ways.

Formula One stuck to its global circuit and had seemingly abandoned the U.S. until Ecclestone made the surprise announcement in May 2010 that it would return with a 10-year deal.