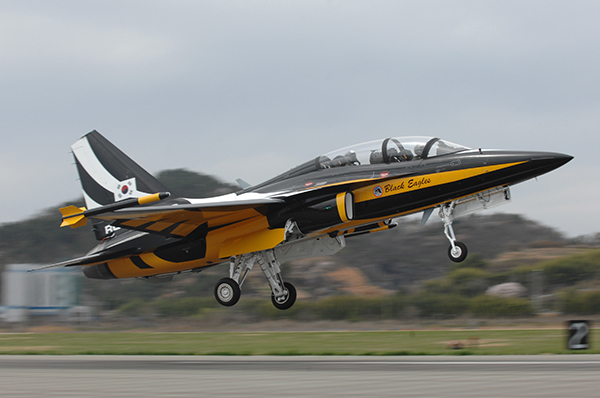 A T-50B jet of the Air Force’s stunt team Black Eagles takes off for an exercise. A T-50B trainer jet crashed yesterday on a mountain in Hoengseong County, Gangwon, killing a lone pilot. [YONHAP]


A trainer jet belonging to the Air Force’s flight demonstration team Black Eagles crashed yesterday into a mountain in Hoengseong County, Gangwon, during an exercise at around 10:30 a.m., killing a lone pilot, identified as Capt. Kim Wan-hee.

The accident yesterday marks the first time that a supersonic advanced trainer T-50B jet, exclusively manufactured and run for the air-stunt team, has crashed.

The jet was one of two aircraft that took off from an air base in Wonju around 10:25. About five minutes after takeoff, Kim’s plane crashed into a mountain about 9 kilometers (5.59 miles) away from the base. Debris was found 300 meters (328 yards) from the crash site, the Air Force said yesterday.

A parachute was also found hanging in a tree on the mountain, about 70 meters down the mountain from the crash site, but it was unknown at the time how it got there. Kim’s body was found in the cockpit.

“I heard a thundering sound as the jet flew by. Then I saw the flames from the crash,” said a woman surnamed Won.

The Air Force said it will determine the exact cause of the crash after investigating the scene and examining the debris. No reports of civilian casualties or property damage were made.

In May 2006, a Black Eagles pilot was killed during an air show in Suwon, Gyeonggi, causing the team to suspend performances.

The team was dismantled in 2007 following its air show at the Seoul International Aerospace & Defense Exhibition, and was re-launched in October 2010 with the new T-50B trainer jets.

Capt. Kim, who joined the Black Eagles last year, is survived by a wife and an 8-month-old daughter.