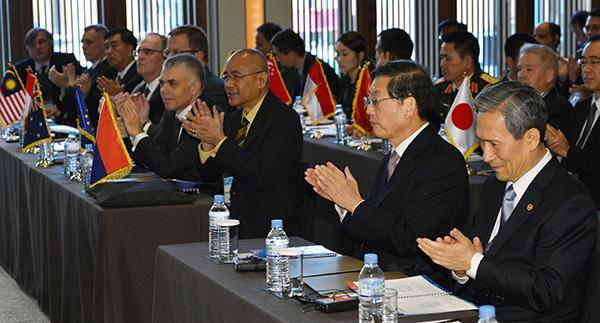 
Senior defense officials and security advisers from home and abroad gathered in Seoul yesterday for a regional security forum aimed at discussing ways to curb weapons of mass destruction and handle North Korea’s nuclear threat, the Ministry of Defense said.

The three-day forum runs through today at the Shilla Hotel in Seoul.

“North Korea’s nuclear weapons and missiles and military provocations are hampering peace on the Korean Peninsula and in the Asia-Pacific region,” South Korean Defense Minister Kim Kwan-jin said in an address. “Global cooperation and understanding is needed to handle these threats and seek co-prosperity.”

Kim said the Asia-Pacific region has become a “strategic point” as the U.S. increasingly puts more of its defense focus on the area amid China’s rise.

He called for concerted efforts to maintain peace and stability in the region.

“There are several causes of conflicts in this region, including arms races, territorial conflicts and historical problems,” Kim said. “I hope defense officials and security professionals will have in-depth discussions during the SDD to develop relationships.”