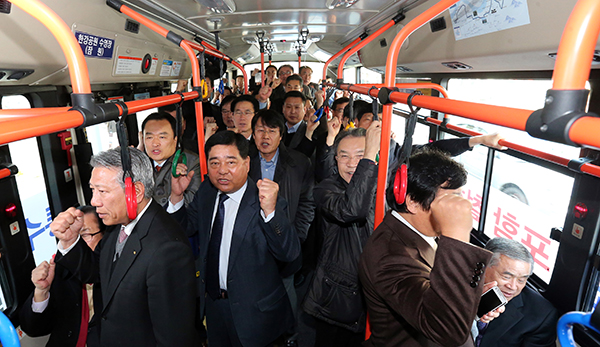 Members of the National Association of Bus Companies ride a bus yesterday on their way to the National Assembly to show their opposition against an impending bill that would designate taxis as public transportation. The bus association warned of an unprecedented nationwide walkout starting from midnight tonight should members of the transport committee pass the bill and hand it over to a plenary session scheduled for Friday. [YONHAP]


Bus drivers declared yesterday they would stage a nationwide walkout at midnight tonight if a revised bill, which recognizes taxis as public transportation, is passed at the Legislation and Judiciary Committee of the National Assembly today, which will mark the first time ever for a nationwide bus strike.

The National Association of Bus Companies stated yesterday a total of 44,391 buses nationwide, including intercity buses, with 112,102 drivers from 17 provinces and cities, will stop running in protest of the revised act should the committee pass the bill today at the Assembly, which the association claims unjustly favors the taxi industry.

If taxis are recognized as public transportation, they will be entitled to state subsidies and allowed to use bus lanes. 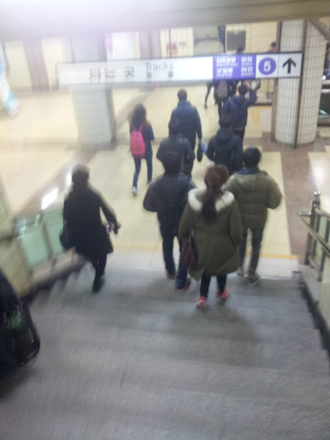 Of the total number, about 7,500 buses in Seoul are expected to be stopped in the walkout.

“We will carry out an indefinite strike starting Thursday should the bill be passed through the legislation committee at the Assembly,” the bus association said in its statement released yesterday.

The revised act on public transportation aiming to recognize cabs as a means of public transportation was unanimously passed through the National Assembly’s Land, Transport and Maritime Affairs Committee last Thursday, a move which the bus association criticizes as politically motivated to garner votes ahead of the December presidential election.

“An additional 2 trillion won [$1.8 billion] will be required for the transportation budget if taxis gain public transportation status,” claimed Lee Joon-il, chairman of the bus association.

“It is regrettable that lawmakers passed the bill at the transport committee that would cost over 2 trillion won [if ratified] without a single public hearing, only concerned about winning ballots from interest groups for the upcoming election.”

If the members of the legislation committee pass the bill today, it will be handed over to a plenary session, scheduled to be held on Friday, to be voted on by the 300 Assembly members.

Bus drivers contend that in order to make up for the 2 trillion won required to implement the bill, funds initially allocated to buses will be depleted, which will inevitably lead to a hike in bus fare and an additional burden on taxpayers.

The Korea Taxi Association counters that additional funding for cabs will be feasible under the current budget plans without causing a reduction in subsidies for other public transportation.

The government, however, is raising concerns that the recognition will lead to increased budget constraints.

“We do not know whether it would additionally incur as much as 2 trillion won for the new bill, as claimed by the bus association,” said Kim Hak-won, official at the Public Transportation Division at the Ministry of Land, Transport and Maritime Affairs.

“However, we predict that financial pressure for the central government will be enormous to implement the legislation should it be ratified.”

The ministry is considering running more subway trains and extending subway running hours by one hour to minimize the fallout from the walkout planned for tomorrow.