Park Ji-sung, QPR one away from winless record

Park Ji-sung, QPR one away from winless record 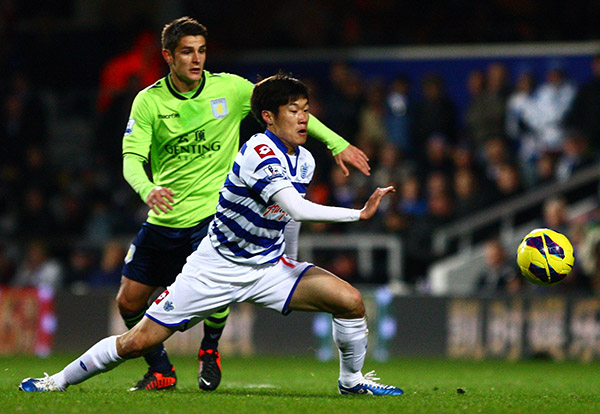 Korean midfielder Park Ji-sung of Queens Park Rangers fights for the ball during the Premier League match against Aston Villa at Loftus Road in London, Saturday. The match ended in a 1-1 draw. [PENTA PRESS/YONHAP]

In manager Harry Redknapp’s first home match in charge of QPR, the hosts had to fight back from a goal down to earn a point. But the Rangers have now failed to win any of their opening 15 league matches - equaling the record set by Swindon in 1993-94.

Villa forward Brett Holman made it 1-0 with a long-range drive in the eighth minute, but QPR midfielder Jamie Mackie’s header leveled 10 minutes later.

QPR stayed last in the standings, seven points from 17th-place Sunderland, which has a game in hand and 12-goal superior differential. Villa rose to 16th place, two points above the drop zone.

Manchester United moved three points clear at the Premier League summit after beating Reading 4-3 in a remarkable game on Saturday, which was to prove a day of despair for Chelsea and Arsenal.

All the goals came before half-time at the Madejski Stadium, equalling the Premier League record for first-half goals, as United overcame their defensive frailties to draw away from Manchester City - held 1-1 by Everton - ahead of next weekend’s Manchester derby.

“I thought it would be a record score against Reading for the Premier League at half-time,” Manchester United manager Alex Ferguson said.

With the Manchester derby at the Etihad Stadium looming on Sunday, Ferguson will know his side can ill-afford a repeat defensive performance. “We have to sort that out,” he said. “We got battered and deserved to be but we are getting goals to rescue us all the time.”

United conceded six goals, albeit on home soil, 14 months ago to next opponents Manchester City.

Chelsea is now 10 points off the pace in third place after seeing their run without victory stretch to seven games in a 3-1 defeat at West Ham United, while Arsenal tumbled to 10th after a 2-0 loss at home to Swansea City.

In Spain, Lionel Messi closed in on Gerd Mueller’s scoring mark as Barcelona crushed Athletic Bilbao 5-1 to set a new record for the best ever start to a La Liga season and stay 11 points clear of Real Madrid.

Barca has now put together 13 wins and a draw from their first 14 matches to beat the previous best start set by Real.