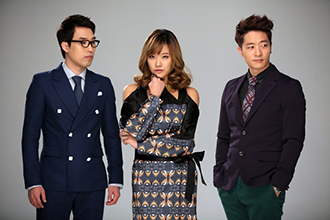 K-pop trio Clazziquai will release a single on Wednesday, its first in more than three years. The song “If Together” was composed by Clazzi, and the lyrics were written by Horan and is the group’s first collaborative work since the album “Mucho Beat” in 2009.

There has been much anticipation since it was announced that the group would release a new song.

The group formed in 2004 with Clazzi as the central figure, composing all of the group’s songs. The group fused hip-hop, ballad and electronic sounds and became a pioneer in K-pop for its unique flavor and sounds.

Although not active as a group for most of the year, Alex and Horan have been in the spotlight for various reasons.

In April, Alex’s need for speed was made apparent when he signed up with a professional racing school. The singer competed in various competitions during the year. Then in July, he was booked for DUI.

Meanwhile, the group’s token female singer was spotted with a lover in July, who was revealed to be an ex.