[INTERVIEW] For NGO executive, now is the time to help kids in need

[INTERVIEW] For NGO executive, now is the time to help kids in need 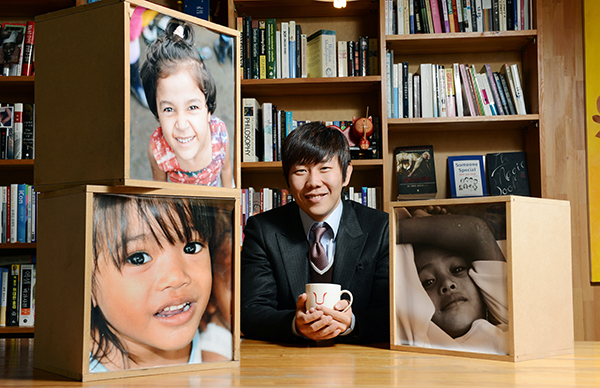 
According to the United Nations, an estimated 6.9 million children under the age of the 5 died last year. While many people think that supporting children is important, Shin Se-yong, chief executive officer of United Help for Int’l Children (UHIC) says what is most important is to put those thoughts into action before it’s too late.

Shin’s UHIC, the non-governmental organization he founded in 2004, has a slogan “This Is the Moment” to emphasize the urgency of helping children in poverty.

After supporting children in a variety of ways, Shin says his organization now mainly focuses on saving lives. He contends that assistance for children is most effective when it is targeted, rather than delivered by local groups that support a broad swath of charities.

Starting this year, UHIC began an initiative called “Saving one life in one month.” Its overseas staff picks children with urgent needs, and the NGO concentrates on the step-by-step delivery of help.

To generate income, UHIC founded a magazine called “UE,” an abbreviation of “united earth,” in 2008. Subscription fees for the monthly magazine, which covers topics related to war, human rights and poverty, among others, go to support children in need.

Shin says his life changed when he decided to study abroad, following in the footsteps of his older brother who went to the United States.

The Seoul-born CEO told the JoongAng Ilbo he was curious about living abroad when he noticed that whenever his brother returned to Korea during school vacations, he always had a different mind-set.

Because his parents at first were unwilling to send him to the United States, he ran away from home to the southern port of Busan, hoping to secretly board a ship to America. But Shin was determined, and eventually persuaded his father to allow him to go. He left Korea at the age of 13.

However, life in the United States was not easy. Plagued by loneliness and racial discrimination, Shin started a diary and published a book titled “I’m Korean” in 1992, which sold more than a million copies.

While studying at Oxford University, Shin says, he learned that it’s not politics and economics that change society, rather it is a philosophy of serving humanity.

After finishing his studies in the United Kingdom, Shin came back to Korea in 2001 to attend Korea Advanced Institute of Science and Technology (Kaist). He later founded a financial firm dealing in derivative products, and his family and acquaintances thought he would have a career as a successful businessman.

So it was a surprise when he suddenly left the company in 2004 to establish the UHIC. The organization is now among those NGOs which have consultative status with the United Nations Economic and Social Council.

UHIC’s first project was to build children’s health centers in the Philippines and Indonesia to distribute medicine. The organization later donated those centers those centers to the local governments.

In 2009, the UHIC established a similar health center in Tanzania. The African center also distributes free medicine to as many as 13,000 children per year.

Shin says the UHIC plans to open a cafe and restaurant in Tanzania similar to Uhican Space as part of a system where Tanzanians can contribute to support local children.

Shin believes that small actions can make a big difference in the lives of children in poverty, empowering them to have hope that someday they will be able to help others.

Q. You could have thought about being a politician, entrepreneur or professor after receiving bachelor’s and master’s degrees in philosophy, politics and economics from Oxford University. Why didn’t you pursue one of those career paths?

A. Actually, politics and economics didn’t really go along with my aptitude. For politics, I hated that the best politicians are linked with how many of the bills they proposed were passed. I also felt dissatisfaction with economics since it only focuses on maximizing utility.

You said you weren’t happy with economics, but then you went for an MBA in financial engineering at Kaist. Why?

I decided to devote my life to helping other people and doing things where everyone can live happily. To help people, you need money, so I decide to study finance. For my last semester I was required to study in a foreign school, but I didn’t apply because I thought the degree wasn’t that important.

You also founded a derivative development company. How did that happen?

I was good at finance. While I was in the Kaist MBA program, I took first place in one of the national security investment tournaments. I started with 50 million won ($46,148), but earned 300 million won at the end to establish a firm. I think 70 percent of failure in investments comes from greed. As I abandoned greed, the company made good profits and got wealthier.

But why did you decide to leave the company?

After doing it for three years, I felt so unhappy. After all, I discovered that derivatives products are really just about how to deceive customers. Finance was just a process, but it became a goal at that time. I felt that the idea of “helping children later” was meaningless. The important thing was whether I could do it right now, and that’s why I quit the firm.

Now you are running a cafe called Uhican Space. What does the cafe do?

It is a book cafe and all of the profits go toward supporting children. It also is our group’s office. Three of our employees and 10 volunteers manage the operation. Excluding electric fees and operating costs, everything else goes to fund UHIC.

We have lot of regular customers because they know what our mission is. We are earning 15 million won to 20 million won per month.

Why are you focused on helping children?

Against their will, some children are living in poor environments, and they are weak compared to adults who can take care of themselves. Those factors made me sad. I know there are lots of people to help, but there is a reason why I have made it my priority to help children.

It seems there are still children in Korea who need help, but why do you think you should also help children in foreign countries?

I think we live in one united world. Things that we use often come from exploiting poor countries and their cheap labor. Economically advanced countries have a responsibility to help poor countries. With a mindset of “supporting those who don’t even have a piece of bread,” I began to help children in poor countries.