Special exhibition offers a window on the world of early glassmaking

Special exhibition offers a window on the world of early glassmaking 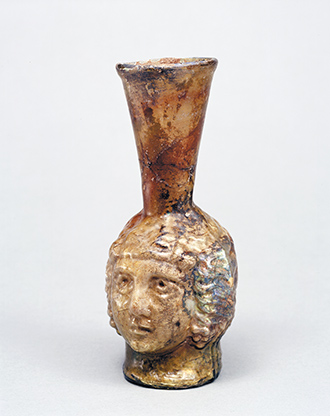 Today glass is all around us. Windows, a drinking glass, a pair of eyeglasses.

But when did humans start to use glass? According to a first-century book by Roman naturalist Pliny the Elder, Phoenician traders were the first to develop glass manufacturing techniques. Phoenicia was a civilization centered on the coast of what today is Lebanon and which flourished from BC 1550 to 300 BC.

However, most historians think glass was used before then - about 3500 BC - along the coast of present-day Syria, in Mesopotamia or Egypt.

You can learn all about it at the National Museum of Korea in Yongsan, central Seoul, which is currently holding this year’s last special exhibition, titled “History in Glass: 3,000 Years of Glassware from the Mediterranean and West Asia.”

Visitors can enjoy 375 pieces of glassware, all of them from the Hirayama Ikuo Silk Road Museum in Japan. The museum has a collection of about 9,000 sculptures and craftworks from the Silk Road. The collection is particularly well known for high-quality Buddhist sculpture and ancient glassware.


The exhibition is divided into three parts in chronological order. The first, dubbed “The Beginning of Glassmaking,” explores the earliest forms of glass. In particular, it examines three types of glass - core-formed, cast and mosaic.

While the types are a little too technical and scholarly for laymen, the most fun to be had in the first part of the show is a section showing glass beads with face designs found across many regions and time periods, from 6 BC to AD 3. To Koreans, such “face beads” are of particular interest because they also were found in the Silla Dynasty (57 BC to AD 935). They have fascinated Korean scholars because they are proof of early trade with other countries. 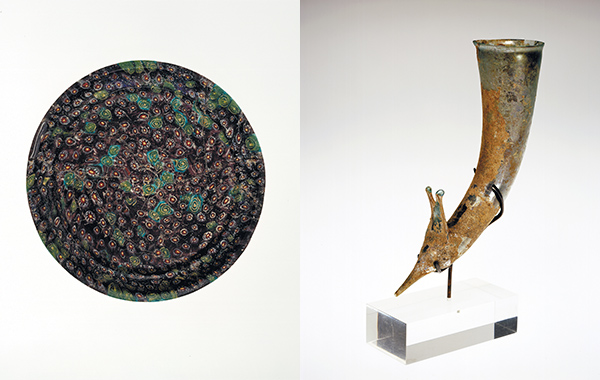 From left : Convex dish (1 BC to AD 1); Animal-head rhyton (second to third centuries)


Perhaps the most important development in the history of glassmaking was the invention of glassblowing, which involves blowing molten glass into a bubble using a pipe or tube. The second part of the exhibition is dedicated to glassware produced after the introduction of glassblowing.

The technique forever altered glassmaking because it reduced the amount of time it took to make glass pieces from days to just minutes.

“Previously, glass was made only for privileged people who could afford it,” says Yang Hee-jeong, the museum’s curator. “But after glassblowing came into the picture, glass became more widely produced and distributed.” Yang adds that from then on, glass was used to make everyday goods for ordinary people. 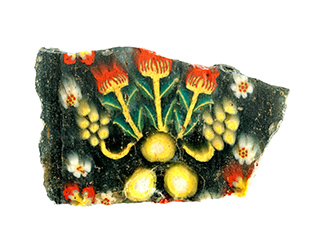 
One notable artifact in the second part is the animal-headed rhyton from the Eastern Mediterranean in the second to third centuries. It is strikingly similar to ones found on murals in the tombs from the Goguryeo era (37 BC to AD 668), as well as to the actual relics found in the Three Kingdoms era (57 BC to AD 668) in Korea.

The third part of the exhibition, dubbed “The Flourish of Decorative Glass,” is dedicated to the diversification and creative use of glassware. Museum officials also added a twist to traditional exhibition techniques by illuminating the pieces using LED lights and showing the backs of the pieces by installing mirrors.

Since 2008, the National Museum of Korea has hosted a series of exhibitions highlighting some the world’s best-known civilizations. “Glory of Persia” in 2008 and “Pharaohs and Mummies” in 2009 were both big hits.

This year, the museum held “The Civilizations of Turkey: Emperors in Istanbul,” featuring important treasures from several of Turkey’s national museums, as well as “Maya 2012,” focusing on the great Mesoamerican civilization.

“History in Glass: 3,000 Years of Glassware from the Mediterranean and West Asia” runs until Feb. 17 at the Special Exhibition Gallery in the Permanent Exhibition Hall on the first floor of the museum. Admission is free. The museum is open until 9 p.m. on Wednesday and Saturday; 7 p.m. on Sunday; and 6 p.m. Tuesday, Thursday and Friday. It is closed Monday. To get to the museum, go to Ichon Station, line No. 4, exit 2. For more information, visit www.museum.go.kr or call 02-2077-9271.