Japanese Prime Minister Yoshihiko Noda, second from left, gives a speech as he addresses soldiers in front of a Patriot Advanced Capability-3 (PAC-3) missile launcher at the Defense Ministry in Tokyo yesterday.[AFP/YONHAP]


North Korea appeared to have begun fueling a storage tank for the long-range ballistic rocket Unha-3, a signal that the launch is imminent.

“Some work equipment was also spotted.”

All three stages of the rocket have been placed on the launchpad in Tongchang-ri, in the western coastal region of the country, South Korean sources said previously. 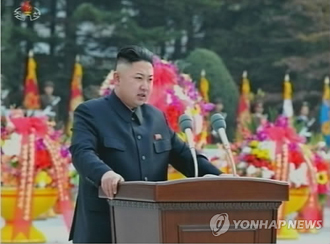 “In order to launch the rocket between Dec. 10 and 22, the North will complete all procedures no later than Dec. 9, including fueling the rocket,” a rocket scientist at the Korea Aerospace Research Institute told the Korea JoongAng Daily on the condition of anonymity because he doesn’t want the North to know his name.

“As they use a special material that prevents the liquid fuel from rusting the inside of the rocket, they can basically launch it any time they want.”

A satellite image released by GeoEye, a U.S. satellite imagery observer, shows trucks parked near the launch pad, raising suspicions that they probably transported launch equipment to the pad.

The North has reported to the International Maritime Organization that it will fire a rocket southward between Monday and Dec. 22 and that the first stage will drop into the Yellow Sea and the second into the waters to the east of the Philippines.

However, another South Korean government official told JoongAng Ilbo yesterday that it became difficult to figure out what exactly is happening near the launchpad.

“A large tarp is covering the pad at the moment, so it’s hard to find out what’s going on there,” the official said. “We assume that the North Korean regime is trying to hide its missile technology and characteristics of the rocket.”

The Japanese government convened a national security meeting yesterday and determined to issue an order to intercept a rocket from North Korea if it enters its territory.

Satoshi Morimoto, Japanese defense minister, yesterday ordered troops to immediately shoot down any rockets or debris if they fall in Japanese territory.

Morimoto ordered defense officials to put all efforts into collecting information and tightening vigilance while cooperating with concerned countries such as the United States.

The Japanese Defense Ministry also deployed three Aegis-equipped warships to the East Sea of South Korea and the East China Sea. It also dispatched the PAC-3, surface-to-air missile interceptors, to seven bases in the country, including Tokyo.

The ministry also decided to station some troops on Okinawa, the southernmost prefecture of the country, which is below the rocket’s trajectory, for intelligence gathering.

Analysts say the North is trying to commemorate the first anniversary of the late leader Kim Jong-il’s death and mark the first term of his son Kim Jong-un’s rule.

Although the regime claims that what sits on top of the projectile is a satellite, the international community sees it as an attempt to develop a ballistic nuclear-capable missile and a breach of UN Security Council resolutions.