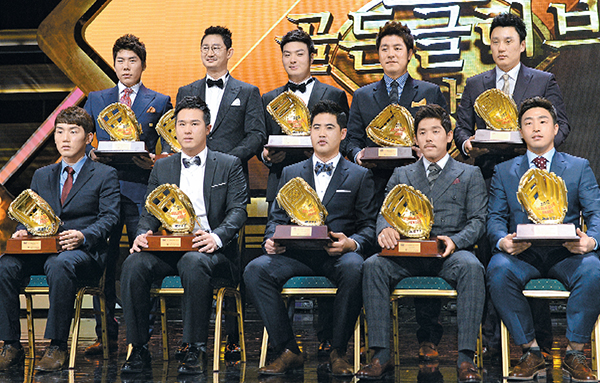 
The Korea Baseball Organization finally gave the green light to the creation of a 10th ball club yesterday, giving in to months of pressure by players, who recently resumed threatening a host of collective actions including boycotting the upcoming World Baseball Classic.

The decision to create a 10th team, reached unanimously at a hurriedly arranged KBO directors’ meeting, was made hours before the Golden Glove award ceremony, which the Korea Professional Baseball Players’ Association also threatened to skip.

The biggest season-ending celebration for the domestic league was held as planned, announcing a total of 10 winners, including Park Byung-ho of the Nexen Heroes, who was named the regular season MVP last month.

“Currently, our country has not had a sufficient environment to create a 10th baseball club,” the KBO said in a statement. “But to resolve the imbalance in the operation of the league and consider the hopes of the baseball community and fans, we decided to approach the issue from a broader point of view and create a 10th club early.”

The breakthrough came seven months after it approved the KBO debut of the NC Dinos, set for next year, which triggered concern over possible disruption of the 2013 season series. With an odd number of teams, one club will have to sit out a series and rest their starting rotation. Founded last year as the ninth team in the KBO, the Changwon-based club was put in the Futures League for this season.

The timing of the KBO debut of a 10th team has yet to be determined, but officials said it would likely be in 2015.

The KBO directors’ meeting was attended by the KBO commissioner Koo Bon-neung, Secretary General Yang Hae-young and the presidents of the nine clubs, except for the Kia Tigers. Lee Sam-wung, the president of the Gwanju-based club, entrusted his say with the commissioner.

The controversy surrounding the creation of a 10th KBO team surfaced in June when the league decided to delay discussions of the issue indefinitely, citing the lack of players in the country.

The Korea Professional Baseball Players’ Association (KPBPA), the labor union representing the league’s players, immediately began pressing league officials to pick up the discussion, threatening the boycott of the All-Star Game, the second-half of the season and the World Baseball Classic to be held in March. The KBO initially talked them into dropping the threat, promising to open discussions soon.

But after months without talks, the KPBPA came up with another series of threats, this time including boycotting the Golden Glove award ceremony, spring training and the World Baseball Classic.

The players’ association has said that having another team will create more chances for players to compete and thus will improve the quality of Korean baseball in the long run.

“The Korea Professional Baseball Players’ Association will provide as much cooperation as we can for the management of the 10-club system,” the association said in a release, welcoming the KBO’s decision to create a 10th team.

The KPBPA immediately withdrew the boycott threat, and the players who made the shortlists of the Golden Glove attended the ceremony held yesterday afternoon.

During the ceremony, where the results were announced on the spot, Park, 26, was announced as the winner in the first-base category, garnering 275 out of 351 votes, beating Kim Tae-kyun of the Hanwha Eagles, who received 54.

The Golden Glove in pitching went to Jang Won-sam of the Samsung Lions, who led the KBO in wins this season with 17. Jang edged out Brandon Knight (16-4) of the Nexen Heroes by 128 votes to 121 votes.