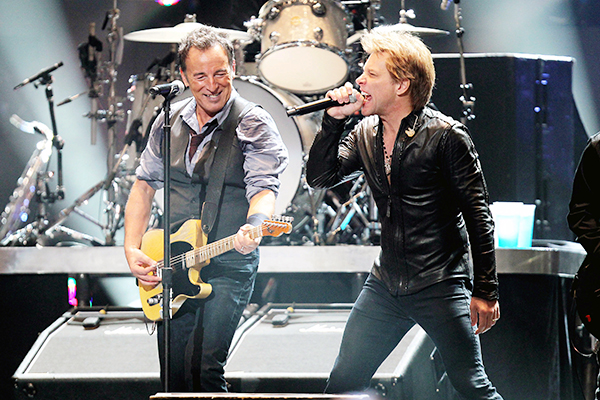 NEW YORK - Bruce Springsteen, the Rolling Stones and Alicia Keys were among the headliners Wednesday for an all-star benefit concert for victims of Superstorm Sandy, in what producers promised was “the greatest lineup of legends ever assembled on a stage.”

“How do I begin again? My city’s in ruins?” Springsteen sang. He was joined by fellow New Jersey native Jon Bon Jovi for “Born to Run,” ushering in a night of musical duets.

Next up, Roger Waters performed alongside Eddie Vedder, and Paul McCartney was due to jam later in the evening with Dave Grohl.

“This has got to be the largest collection of old English musicians ever assembled in Madison Square Garden,” Mick Jagger told the crowd. The Stones performed “You Got Me Rocking” and “Jumpin’ Jack Flash.”

To help with fund-raising, Leonardo DiCaprio, Kristen Stewart, Jake Gyllenhaal, Chelsea Clinton and Billy Crystal were among celebrities taking part in a telethon during the concert, which was expected to last four to five hours.

Comedian Adam Sandler took the stage for a Sandy-themed spoof on Leonard Cohen’s “Hallelujah,” rhyming the title with “Sandy, Screw Ya!”

Backstage, actress Susan Sarandon recounted losing power in her New York home, saying it was a small hardship compared to those who lost their homes.

Steven Van Zandt, guitarist of the E Street Band, scolded “the oil companies” and “Wall Street guys” for not doing more to help.

“Even with the music business not what it used to be ... we are proud to be here,” he said.