Gov’t pushes sensors as an industry

Gov’t pushes sensors as an industry 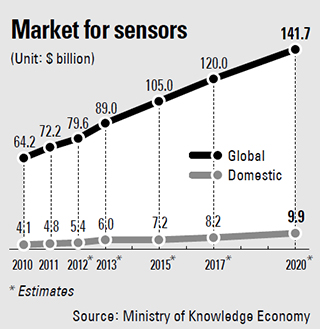 The government pledged to invest 334 billion won ($310 million) by 2019 to develop the sensor industry, seeing promise in the devices used more and more in cars, smartphones and other products.

The Ministry of Knowledge Economy yesterday announced its strategic plan to make Korea the fourth-largest sensor market by 2025 by fostering 20 medium-sized companies specializing in sensor manufacturing.

Sensors measure physical information such as temperature, pressure and speed and convert it into signals.

Many of Korea’s major export items including auto parts and electronic devices use sensors but local companies still rely on imports.

A vicious cycle has developed as local companies spurn domestic sensors because of quality issues, and the sensor makers aren’t prosperous enough to upgrade and improve their products.

“Korea’s technology level only measures 65 percent of the most developed manufacturers,” said the ministry.

While Korea accounted for merely 1.6 percent of production last year, the government plans to raise the number to 5 percent by 2025.

To raise competitiveness of local companies, the ministry will choose 10 basic sensor-related technologies Korea needs to localize. Local companies should be able to make around 60 core sensors.

The government will also establish a communication channel between industries and academics to share information.