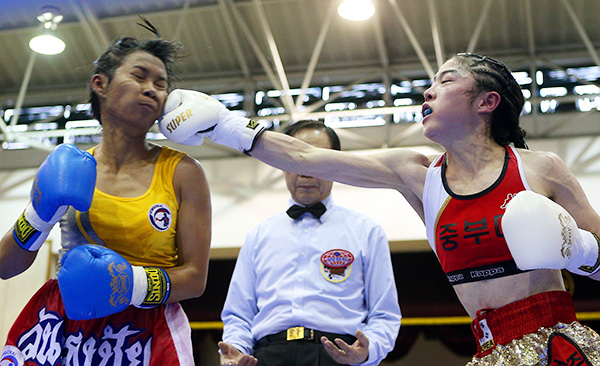 
Kim Ju-hee won the light flyweight title in a technical knockout against her Thai opponent in Seoul on Saturday, setting a new record for the number of organizations acknowledging her crown.

The 26-year-old Korean boxer took down Ploynapa Sakrungrueng in the 10th round of a World Professional Boxing Federation-sanctioned bout at Yeongdeungpo Girls’ High School.

No other female boxer has retained a title approved by seven or more women’s boxing governing bodies in the same weight class.

Kim had held the previous record by winning a title approved by seven governing bodies, except for the World Professional Boxing Federation (WPBF), in a fight against the same opponent, Sakrungrueng, in Seoul in March.

The WPBF computerized world rankings, which do not reflect Kim’s two recent victories, placed her as the sixth in the world in the light flyweight class, or 48.99 kilograms (108 pounds).

Kim has won 18 times including eight KOs in her 11-year professional career, against one loss and one draw. Sakrungrueng, 19 years old with a 9-2-0 record was ranked 29th.

Kim has had an impressive career early on, becoming the youngest world champion in the history of the International Female Boxers Association, beating Melissa Shaffer of the U.S. at the age of 18 in the IFBA Junior Flyweight world title bout held in Korea in December 2004.

Despite her domination in the ring, Kim struggles to earn the star power other athletes like figure skater Kim Yu-na enjoy across the country.

She has long struggled to secure sponsors and even had to forfeit two of her titles, one sanctioned by the IFBA and the other by the World Boxing Association, in 2004 and 2007, respectively, after failing to arrange the boxing matches to defend her titles.

She also had difficulty arranging the record-setting fight on Saturday, but a local company, without identifying itself, came out to help her, paying the 150 million won ($139,665) needed to arrange the title match.

“I want to name the company, but I can’t because they don’t want me to, but I am really thankful for their help,” Kim told reporters after the match.

Kim also credited her latest win to her sick father, who has been in the hospital for a long time. “My beloved father and sister in the U.S. - it is all thanks to my family that I could hold out like this,” she said with teary eyes. “I love you, Dad.” Her next bout may be held in Las Vegas in May. Jeong Mun-ho, the head of her boxing association, said that the Korean-American community in the U.S. has been talking to help arrange a bout in America.