Kim Jong-jin, an office worker in his early 30s in Seoul, waited a frustrating 11 weeks to put his money down on an iPhone 5. That was the gap between when the device went on sale in major markets like the U.S. and Korea.

Less than a week later, he has a new purchasing dilemma: how to plug the iPhone in to recharge it in his office.

The iPhone comes with one cable to connect to a USB port or to an electrical socket. But one cable isn’t enough for most people. Kim uses that cord at home. And he can’t use the cables from his previous iPhone because the new iPhone model has a different charging socket. The 30-pin socket and cable used in previous Apple devices have been replaced with an 8-pin socket and cable called the Lightning connector. 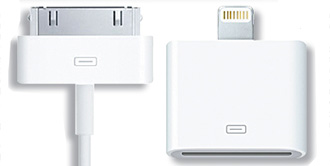 The charging socket on the iPhone 5, right, is smaller and a tighter fit. But an adapter to use a USB cable from an older iPhone with a 30-pin socket, left, carries a steep price tag of 40,000 won (37.2 dollar).

Apple touts the Lightning connector as being smaller, a tighter fit and the plug can be put in regardless of which side is up.

But it’s not compatible with the old plugs, and that means a trip to the store and additional outlay of money.

Kim can buy a new cable from Apple, but that will cost 26,000 won ($24.2). He’ll also have to buy a new charger to use in his car and a battery charger with a Lightning connector.

Apple also sells a Lightning to 30-pin Adapter, which would work on all of his old cables.

At an online Apple store in the United States, by comparison, the former is priced at $29 and the latter $39.

“Buying the Lightning to 30-pin Adapter is the right thing to do when it comes to the issue of environmental waste because all of [the previous iPhone accessories] will become obsolete if I chose to buy a single USB cable,” Kim said. “But I still think the adapter is way too expensive.”

The price gap between the U.S. and Korea for the simple adapter is $8 and for the one with a cable $13. Apple Korea refused to comment on the price difference between the two countries.

Dozens of Internet stores are already selling copycat adaptors at 10,000 won to 20,000 won plus up to 3,000 won shipping fees. Their quality is not guaranteed, but Apple’s is. But the price is pretty tempting to consumers like Kim.

“I’m thinking of buying the cheaper, unauthorized one instead,” he said.

Debate over the steep adapter price has surfaced in other countries, too. NBC even ran a story with the headline, “New iPhone Cord Frustrates Millions.”

Apple explains that the adapters are not simple devices. The Lightning port is purely digital, while the old 30-pin connection in cars or speaker docks use analogue signal.

The adapter has its own digital-to-analogue converter that allows the iPhone’s digital signal to be recognized by the analogue dock.

That has made it a must for a slew of owners of docking speakers costing hundreds of thousands of won from such brands as Bose, Yamaha, JBL, Sony and Philips. Park Hye-won, a housewife in her late 20s, complains it has been less than half a year since she bought a Yamaha docking stereo system from a Costco outlet in central Seoul for almost 500,000 won as she got married. She is far from happy with Apple’s evolution.

“Even if I bought an adapter for the iPhone 5, the stereo is going to look ugly and unstable with it,” she said.

Those considering buying new docking speakers compatible with the iPhone 5 have two options at present: Philips and JBL. But the new products have yet to arrive in Korea.

Despite their hefty price tags, new iPhone 5 accessories were sold out last week at many stores across Seoul, including Olleh Square, located at the headquarters of KT in Gwanghwamun, central Seoul, one of two carriers supporting Apple devices, and Kyobo Book Store.

At an Apple store in the Galleria Department Store, the cables and adapters went out of stock by Friday and as soon as new ones arrived the next day more than half were sold in just a few hours, according to a clerk.

Meanwhile, KT’s analysis of 160,000 iPhone 5 buyers with KT subscription over the eight-day period since Dec. 7 shows that twentysomethings accounted for the largest portion at 42 percent, followed by people in their 30s at 39 percent. People 40 and over made up only 16 percent.

About 67 percent of the latest Apple phone buyers turned out to be men, according to the study released yesterday. It also showed that 70 percent of those existing iPhone users who changed their handsets since Dec. 7 opted for the iPhone 5.