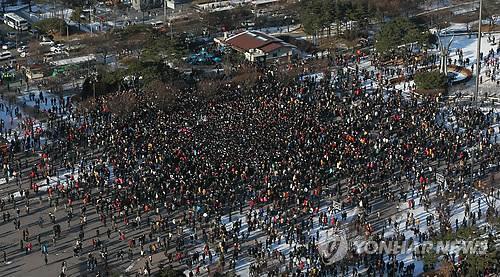 Braving the chilly winter weather, thousands of singles gathered in nine cities across the nation on Christmas Eve for a mass blind date event organized by a young Facebook user.

The event, which was initially planned for 14 cities, was held amid a heavy police presence due to safety concerns.

In the Seoul event, which started at roughly 3 p.m. at Yeouido Park near the city's main financial district, singles desperately tried to find that special someone to spend Christmas with.

Roughly 3,500 people gathered at the park, while 700 men and 300 women actually took part in the event, according to police estimates.

It was recommended for participants to wear white for men and red for women but not many were spotted following the dress code. There was no report of incidents or crimes having been committed.

But according to netizens who dispatched news from Yeouido on Twitter, the crowd was relatively smaller than expected with males overwhelmingly outnumbering female participants.

The event first took off when 24-year-old college student Yoo Hyung-tae posted a message on his Facebook page early this month, suggesting the idea of a mass blind date for those who do not have a partner to spend Christmas Eve with.

As more than 35,000 people nationwide initially showed intent on the Internet to attend, police dispatched about 1,000 officers to the venues in the 14 cities to prevent sexual assault and crimes targeting teenagers.

More than 6,300 people nationwide gathered to see blind date event, with around 2,860 people actually taking part, according to police.