Looking for a clear ruling on Liu

Looking for a clear ruling on Liu 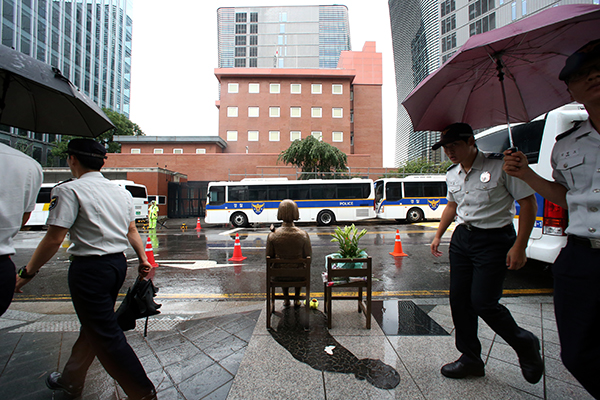 “I only belatedly found out that my mother had an agonizing past. And my son committed the revenge on behalf of us,” said an elderly Chinese woman, who was sobbing on the witness stand of courtroom 403 at the Seoul High Court on Dec. 13. A man in a green prison uniform was looking at the witness with teary eyes. Suddenly, someone in the audience shouted, “Give Liu Qiang an award and send him back to China!”

The 38-year-old Liu was arrested after throwing firebombs at the Japanese Embassy in Seoul on Jan. 8. He came to Korea on Dec. 26 last year after setting fire to the Yasukuni Shrine in Tokyo. For his arson conviction in Korea, he was sentenced to serve 10 months in prison and completed the term early last month, but he was put behind bars once again after the Japanese government asked Seoul to extradite him to Japan based on a bilateral treaty the two countries have signed regarding prisoners. The Seoul High Court has been in charge of the extradition trial.

Liu’s 64-year-old mother took the witness stand on Dec. 13 and testified that her mother - Liu’s grandmother who died in 1986 - was Lee Nam-young, a Korean woman who was forced into wartime sex slavery in China during the Japanese colonial period.

The mother also presented the Chinese government’s certificate for Liu’s grandfather for his patriotism as he died in 1945 while fighting against Japan during the second Sino-Japanese War.

Following her testimony, Liu’s lawyer and the prosecution gave the closing arguments.

Liu’s lawyer said that Liu tried to leave a mark on the Yasukuni Shrine, the symbol to glorify Japan’s imperialism and wartime criminals, in order to urge the Japanese government to face its history.

The lawyer said his client had no other reasons for the arson than a political cause. “Liu said they will either kiss him on his cheek or kill him,” the lawyer said, “and that is true. If Liu is sent to Japan, he would likely face a severe punishment there.”

The prosecution argued that it is hard to uphold the law and principle if an exception is made even once.

“The matters surrounding the history cannot be resolved through violent means such as arson,” the prosecutor said.

“Foreigners can commit arson in Korea and argue, after leaving the country, that they were political prisoners. The extradition treaty was signed with the Japanese government based on the trust that Japan’s justice system works properly.”

In his final testimony, Liu made an appeal to the judge “to understand the rage of his grandmother and him and bring about justice.”

Reporters from China and Japan as well as officials from the two countries’ embassies quietly wrote down the testimonies in the trial from the gallery. The Japanese and Chinese governments each pressured the Korean government to hand Liu over to them.

A Japanese official said that arson is a serious crime which can result in casualties. He said there are other ways than arson to express a political belief.

“There is a concern that Seoul and Beijing will make a political deal, and I hope that is not true,” he said. “We have faith in Korea’s rule of law.”

A Chinese embassy official said Liu will face unreasonably severe treatment if he is extradited to Japan because the country is quickly turning to the far-right. “If he was just a simple criminal, China and Japan won’t make such a big deal out of it,” he said. “Isn’t Korea’s view on the past the same as that of China’s?”

While both sides argued that they want the case handled by the law and under the treaty, one of them will definitely lodge protests once a conclusion is made. The current law governing extradition and the extradition treaty between Korea and Japan showed that an extradition request can be turned down for a political crime over a concern about discriminatory treatment or over humanitarian concerns.

Of the three reasons, the second and the third cannot be the answer. Even under an extreme rightist government, Japan’s judiciary is an independent body and an unfair trial is unlikely. Therefore, the Korean court needs to decide whether it is a political crime or not.

This trial over the extradition is a complex maelstrom of Northeast Asia’s modern history, diplomatic relationships and national sentiments. It can also be a seed of dispute as new leadership takes office in Korea, China and Japan around the same time.

The case is extremely sensitive, but it is also an opportunity to show the world the high standard of the Korean court system. To this end, the judgment should be solely based on law, not over diplomatic concerns or national sentiment.

The deadline is Jan. 5 of next year. Where will Liu’s next destination be? Expectations are high for the court to issue a clear ruling that can surpass the silent war among the three Northeastern neighbors.

*The author is an editorial writer of the JoongAng Ilbo.
By Kwon Suk-chun