[Sponsored Report] From arts to disaster relief, Doosan helps out

[Sponsored Report] From arts to disaster relief, Doosan helps out 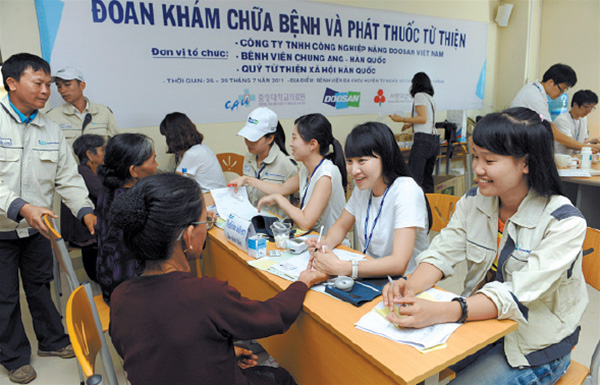 
Doosan is putting in much effort to realize its management philosophy of sharing by contributing in various ways from supporting the arts to helping in disaster-afflicted areas abroad.

The Yonkang Foundation was founded in 1978 to uphold the philosophy “Education is the driving force of national development” of the deceased first president of Yonkang, Park Doo-byung. Since the foundation was established it has supported various educational activities in many ways by supporting research, sending teachers overseas for training and sending books.

The foundation also operates the Doosan Art Center. In October 2010, celebrating the centennial of the birth of Park, it founded the Yongkang Art Awards to support artists with potential in performance and arts, under the age 40 who can promote the Korean art to the world.

At the third Yongkang Art Awards, prizes worth 30 million won were given to performance artists, and they also received 70 million won to create performances, further bolstering the art scene. Art field awardees received 10 million won and the venues worth 90 million won in Doosan residence in New York, Doosan New York Gallery individual exhibition and Doosan Seoul Gallery individual exhibition will be offered. The subsidiaries also lend helping hands to the neighbors with their industrial specialties. Doosan Heavy Industries and Construction has a 6,000-member volunteer group, more than 95 percent of the employees. Through this group the company is conducting systemized and customized volunteer activities, continuing its contribution to the society.

Especially Doosan Vina, the overseas production base, is supporting the cleft lip children surgery with Chung-Ang University Hospital by donating medical equipments and nutritional supplements. In addition, the Doosan Vina volunteer group is offering scholarship to major universities, donating fresh water facilities in Anbin Island in addition to other activities. Doosan Vina has been chosen as the Q-Health business partner in conjunction with Chung-Ang University Hospital in July and signed an MOU with Quang Nam Province Central General Hospital and Hue Medical University Hospital to help further the cause of helping the community. Q-Health is hosted by Koica.