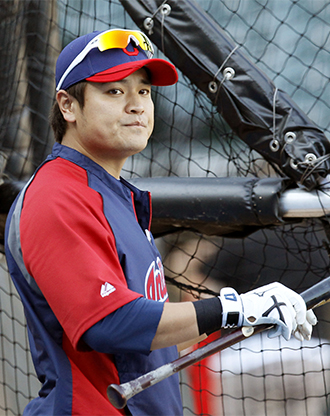 Choo Shin-soo, outfielder for the Cincinnati Reds in Major League Baseball, on Thursday was dropped from Korea’s roster for the World Baseball Classic next spring.

The Korea Baseball Organization said Choo had asked to be left off the national team for the March 2-19 tournament so that he can prepare for his first season with the Reds. He was recently traded from the Cleveland Indians to the National League club.

The start of major league clubs’ spring training coincides with the beginning of training camps for most WBC participants. MLB stars from other countries have skipped two previous WBC tournaments in 2006 and 2009.

Choo will become a free agent after the 2013 season and could command lucrative, multi-year offers depending on his performance next year. Choo would have been the only major leaguer on the Korean team.

Taking Choo’s spot will be Son A-seop, an outfielder for the Lotte Giants in the KBO. Son, 24, led the Korean league in hits with 158 in 132 games and was third in batting average with .314. He has batted above .300 in each of the past three seasons.

Along with Choo, right-handed pitcher Kim Jin-woo of the Kia Tigers, a KBO club, was also replaced Thursday. Kim had been dealing with ligament pains in his right elbow.

In his stead, SK Wyverns’ right-hander Yoon Hee-sang made the national team. The 27-year-old served as a full-time starter for the first time in his six-year KBO career and went 10-9 with a 3.36 ERA. Yoon made two starts in the championship Korean Series this year, but the Wyverns lost to the Samsung Lions in six games.

KBO officials have said Korea will open its training camp in Taiwan on Feb. 12 next year.