Hong and Koo gelled just in time to win big

Hong and Koo gelled just in time to win big 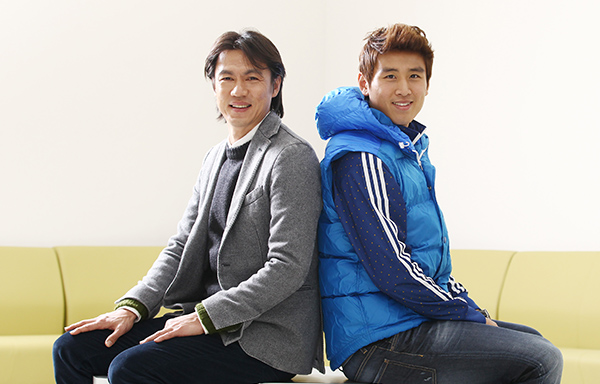 
Korea clinched its first-ever medal at an Olympic football tournament this summer in London but this remarkable feat was even more unlikely as the coach and captain initially failed to see eye to eye. Korea finished fifth in the overall gold-medal tally at the Games.

Koo said Hong, a national hero and former player who took the helm of the U-20 side in early 2009, was often too blunt with him, while Hong said he struggled to believe in Koo, a midfielder who now plies his trade for Augsburg in Germany, as a leader.

Fortunately, they managed to gel over the course of a number of international campaigns, notably the 2010 FIFA World Cup qualifiers in 2009 and the Asian Games in Guangzhou in 2010, and were full of compliments for each other by the time they sat down with the affiliated sports paper of the JoongAng Ilbo in Seoul on Thursday.

Koo said he would now name Hong “coach of the year” and recalled his words of encouragement from previous years.

“In the days leading up the start of the 2010 World Cup in South Africa, I remember feeling very disappointed at not making the squad. But then the coach [Hong] called me and told me, ‘You can become the No. 1 player in our country. Don’t feel frustrated because of one setback,’?” Koo said.

“That call helped me get my career back on track.”

Meanwhile, Hong gave Koo 8.5 points out of 10 for his performance in London. He said he subtracted 1.5 points because the player tried to overextend himself.

“He actually tried to shoulder too much responsibility, and he consumed too much of his energy in doing so,” Hong said, referring to Koo’s aggressive captaincy, which sometimes saw him engage in on-pitch scuffles with opponent or referees during the Olympic tournament.

“I was concerned about him getting exhausted and I wanted to help him control himself better, but it didn’t work quite as I planned,” Hong said.

Hong, who has since stepped down, is leaving for Russia next month to continue his coaching career there. Earlier this month, he agreed to work as an assistant coach for Guus Hiddink, his mentor who led Korea into the semifinals of the 2002 World Cup. The Dutch coach is now working with Anzhi Makhachkala.

However, rumors are already swirling that Hong will replace Choi Kang-hee as the national football team coach, possibly after the end of the 2014 World Cup qualifying campaign in June.

Hong likened his career to being halfway through a match with no goals scored on either side.

“I finished the first half at 0-0, but still having shown dominance,” Hong said. “I’m thinking of various strategies and tactics to make sure I score in the second half.”

After praising Hong’s humility, Koo adopted the same metaphor. He said he felt more like he was trailing 1-0 with five minutes left of the first half.

“I’m just trying to get the equalizer before half time,” he said.

“One of my New Year’s wishes would definitely be for [him] to move a step closer to achieving a bigger dream, such as transferring to a really big club,” he said.