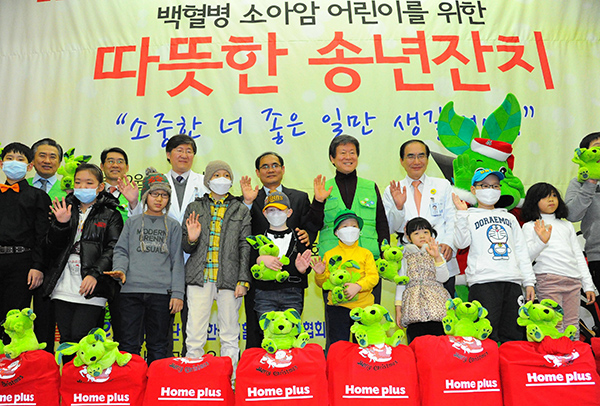 Children battling cancer stand with Homeplus employees at a year-end party sponsored by the company, which has devoted time and money to helping young people in need.


Homeplus is carrying out its “Children Life Saving Campaign” together with its subcontractor companies, employees, customers, the government, NGOs and medical institutes. Recently, the level of participation exceeded 24 million people, and through the campaign, 82 children suffering from cancer have received treatment and 1,000 foster children have received help.

When a customer purchased an item over the past 10 months, Homeplus and its subcontractors donated 1-2 percent of product sales through matching grants, and employees, the government, NGOs and medical institutes cooperated to help children as part of the so-called “Pulbburi Social Contribution Activity.”

Each participant in the campaign donated just 113 won, but this small amount has significantly benefited children with leukemia and those in foster homes.

In addition to participating by purchasing products at Homeplus, many customers gave additional cash to the campaign though donation boxes.

Homeplus sees this as an even more meaningful achievement as it was the result of voluntary contributions from customers and employees. Together, they worked in collaboration with social workers at leukemia centers as well as other social welfare workers and consumer representative groups on this campaign.

The conditions targeted are quite a serious burden on those they impact. According to the Korean Association for Children’s Cancer and Leukemia, leukemia is a top cause of death for children and 25,000 children have suffered from the disease. Every year, 1,200 children are diagnosed with leukemia.

Those who are able to fight off the disease must undergo treatment for at least three years, and many treatments are costly and rarely covered by traditional health insurance. Many of the patients’ parents are in their 20s and 30s and cannot afford to cover medical expenses in addition to other financial burdens.

And currently, there are over 16,000 children who are raised by grandparents or foster homes due to death or illness of parents, abuse, or economic reasons.

Those children living with grandparents or in foster homes suffer from severe economical difficulties since the earnings of an entire family often do not even cover child care.

Thirty-four percent of these children have physical or developmental disorders.

“Although the full recovery rate is over 75 percent for leukemia and other childhood cancers if patients undergo proper treatment, this is often not possible because of the length and cost of required procedures,” said CEO Lee Seung-han. “Also, children in foster homes need strong support to grow and develop healthily. We hope to help better many children’s lives and deliver hope to these children.”