Beijing sends defectors back to Pyongyang despite outcry

Beijing sends defectors back to Pyongyang despite outcry 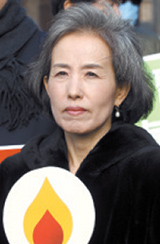 As always, the issue of North Korean defectors made for big news this year.

Despite South Korea’s plea to stop the repatriation of North Korean defectors, the Chinese chose to handle them their own way.

Among them, nine defectors arrested in Yanji by the Chinese authorities were reportedly sent back to the North. China regards defectors as economic migrants and not as refugees.