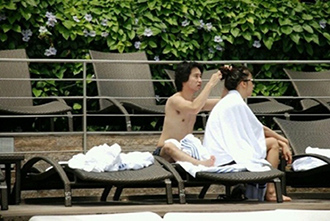 Days after both parties denied they were dating after paparazzi snapped pictures of the two walking around Seoul, actors Ryu Duk-hwan and Park Ha-sun are in more trouble.

This time, the cause of their grief comes from a picture of the two taken while they were in Singapore.
In the picture taken by the poolside of a hotel, Ryu can be seen doing up Park’s hair.

The person who uploaded the photo said that a relative of theirs had seen the two while on holiday in Singapore.

Meanwhile the stars’ agencies are maintaining their “just friends” stance and said that because they are so close, they often go on holidays, although accompanied by others.

The two starred in the movie “World’s Most Beautiful Break-up” last year.