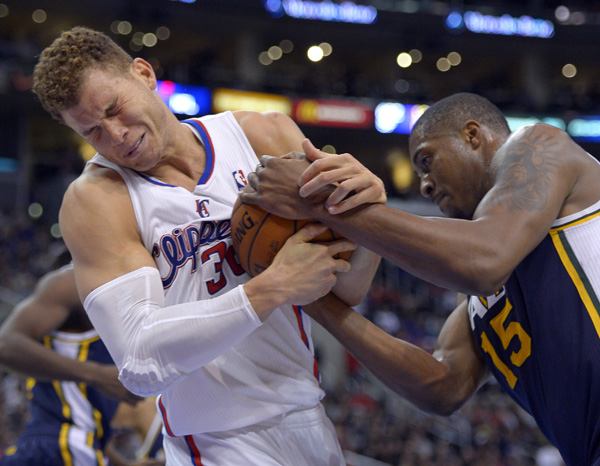 
LOS ANGELES - Jamal Crawford scored 11 of his 19 points in the fourth quarter and the Los Angeles Clippers beat the Utah Jazz 107-96 on Sunday night for their 17th consecutive victory, becoming the third team in NBA history to record a perfect month.

The Clippers went 16-0 in December to join the 1995-95 San Antonio Spurs and 1971-72 Lakers as the only teams to go undefeated over a month. Their franchise-record winning streak is the longest since Boston won 19 in a row four years ago.

Caron Butler led the Clippers with 29 points, making all six of his 3-pointers. Chris Paul added 19 points and nine assists to help them maintain the league’s best record at 25-6.

Al Jefferson scored 30 points - one off his season high - to lead Utah, which fell victim for the third time during the Clippers’ streak. The Jazz lost 116-114 on Friday when the Clippers rallied from 19 points down, and they were beaten 105-104 on Dec. 3, both times at home.

Gordon Hayward added 16 points as the Jazz lost their third in a row and seventh in the last nine games.

Crawford keyed a 10-5 run to open the fourth, highlighted by a 3-pointer and a fast break pull-up jumper that helped the Clippers extend their lead to 89-81. Paul and Griffin didn’t join the second unit until 5:55 remained and Utah had closed within four on a basket by Derrick Favors.

That was as close as the Jazz got. The Clippers made 9 of 10 free throws down the stretch and their defense held Utah to one field goal in the final 3:38.

Los Angeles stretched its lead to 71-59 in the third quarter, when Butler scored 10 of their first 17 points.

From there, the Jazz closed on a 17-8 run to pull to 79-76 going into the fourth. Utah briefly took its first lead since early in the game when Jefferson scored over Lamar Odom, but the Jazz committed two costly turnovers in the final 49 seconds.AP