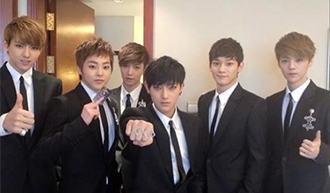 The Chinese components of the boy bands Super Junior and EXO dazzled whilst performing for fans at Jiangsu satellite TV’s end-of-year concert on Dec. 31.

Super Junior-M and EXO-M took part in the show which took place at the city of Nanjing in Jiangsu, rubbing shoulders with some of the biggest acts in China like Jacky Cheung, Wang Leehom, Show Luo and JJ Lin.

Taking advantage of the cameras, Super Junior-M took the time to promote its new look as well as upcoming activities. The band is set to release a new album shortly.