New year starts with snow; freeze to get worse

New year starts with snow; freeze to get worse 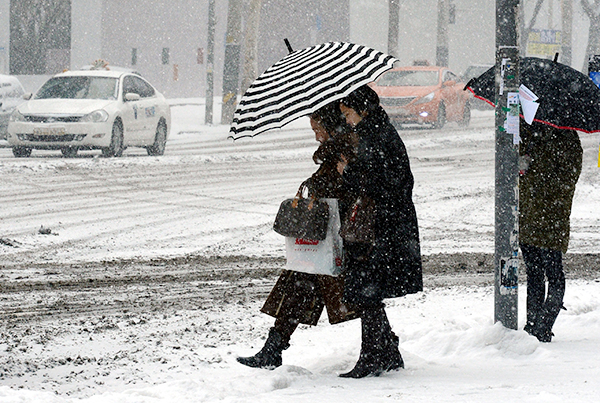 
Parts of the country saw substantial snowfall in the first hours of the new year, slowing traffic and halting a commuter train line in Gyeonggi’s Uijeongbu for about four hours yesterday.

Buses in Seoul changed their routes to avoid snow-filled roads.

The capital was dusted with 3.7 centimeters (1.5 inches) of snow as of 3 p.m. yesterday, according to the Korea Meteorological Administration.

The Seoul Metropolitan Police Agency closed down a road to Mount Bugak in northern Seoul at 9 a.m. amid worries over slippery road conditions due to snowfall.

The Uijeongbu Light Rail Transit Line stopped operations to all 15 of its stations in the northeastern capital area at around 7:45 a.m. yesterday because of the snow.

The suspension forced dozens of passengers to get off seven trains, marking the fifth time the operator halted operations this winter.

Services resumed four hours later after the operator cleared snow from the tracks.

The frequent suspensions have sparked criticism that the line’s services, which are above ground, can’t handle the country’s winters.

The snowfall and temperatures below zero degrees Celsius in Seoul prompted drivers to slow down. The Seoul Metropolitan Government dispatched over 8,000 workers yesterday to clear away snow and ice, and employed 4,367 tons of snow removing materials such as calcium chloride and road salt.

The agency forecast central areas including Cheongju in North Chungcheong, Daejeon, Mokpo in South Jeolla and Daegu will receive up to four centimeters of snow this morning.

The agency added that the country will be free from snow until the weekend starting from tomorrow afternoon.

The cold spell in Seoul is expected to continue, and the temperature will go down to minus 16 degrees Celsius (3 degrees Fahrenheit) tomorrow morning, with the high at minus seven degrees. Temperatures in Seoul will gradually return to the normal seasonal level after Thursday, climbing to zero degrees Celsius Sunday. For Seoul, there is no forecast for snow until Tuesday.

Due to the snow in December, emergency phone calls from drivers to the three major car insurance companies made nationwide from Dec. 24 until Monday reached 301,695 yesterday.