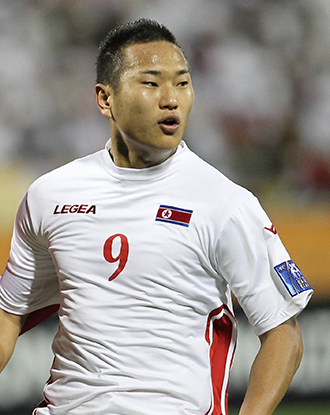 Jong Tae-se, a striker for the North Korean football team for the past six years, has agreed to play for the Suwon Bluewings in the South Korean domestic K-League, according to club officials yesterday. He will transfer from 1. FC Koln in the second division of the Bundesliga in Germany.

It is the first time a North Korean player of this caliber will play in the South, although several other footballers with North Korean citizenship have competed in the K-League.

The transfer fee is 300,000 euros ($394,410), according to Lee Ho-seung, general manager of the Bluewings. The two sides plan to sign the agreement this weekend.

Lee said the 28-year-old forward agreed to a three-year contract, although he declined to disclose the yearly amount. Some media outlets have reported it to be 400 million won ($376,932) per year.

He will arrive in South Korea as early as next Monday for a medical checkup, he said.

“As long as there is no special medical problem, his joining Suwon is certain,” he said.

He was born in Nagoya, Japan, to a South Korean father and a North Korean mother and educated in pro-North schools in Japan. He has played for the national team since 2006, leading the offense with 15 goals in 28 games.

Jong flourished in the J-League, scoring 47 goals with Kawasaki Frontale between 2006 and 2010, and hoped to expand his success overseas with a transfer to the Bundesliga’s second-division club VfL Bochum in 2010. He made an impact with 14 goals with Bochum and moved to Koln in February of last year. FC Koln was then in the first division but was relegated after finishing the 2011-12 season in second to last place.

With FC Koln, Jong has been benched during much of the 2012-13 season, losing out in a competition for the starting position up top. He was sent on the pitch in 10 games since his move to Koln, but failed to score once.

Rumors began to emerge of contact with several South Korean clubs. A local media report last November said that he may come to a K-League club for a deal amounting to 1.6 billion won.

The Bluewings were known to have been the most active in luring Jong, but the Daejeon Citizen were reported to have jumped on the bandwagon with a lucrative deal.

Jong was reported to have favored the Bluewings for its front-runner records in the K-League. The Bluewings, four-time winners, finished fourth last season. He is the second North Korean player coming to the South with experience with the North Korean national team, according to K-League officials.

An Yong-hak, a 34-year-old Japan-born midfielder who has played for the North Korean national team since 2001, came to the K-League in 2006 and played for Busan I’Park and the Suwon Bluewings until 2009.

Ryang Gyu-sa, another 34-year-old Japan-born North Korean, also played for Ulsan Hyundai in 2001, but he first joined the North Korean national team when he played in the J-League.

Kim Myong-hwi was also born in Japan to parents from North Korea and played for the Seongnam Chunma in 2002, but has never played with the North Korean national team, the K-League officials said.

Such cases are so rare that Jong said in an interview with Ilgan Sports in Cologne in November that he was deliberating going to the South and hoped it would be a symbolic move that could contribute to unification.