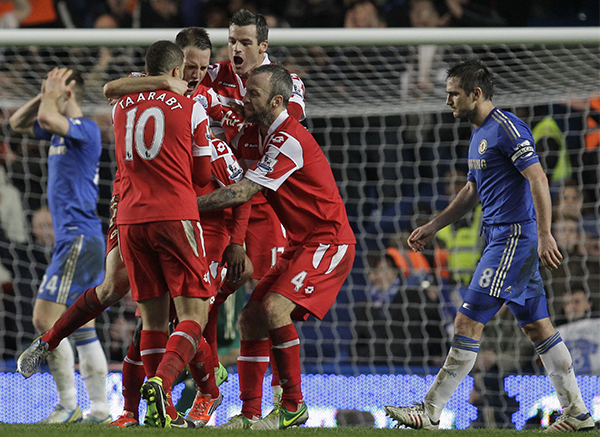 
LONDON - Shaun Wright-Phillips’ second-half winner at his former club Chelsea handed Queens Park Rangers a precious and surprising 1-0 win on Wednesday to give the bottom side a glimmer of hope in their battle to avoid relegation.

Wright-Phillips smashed home a low strike after 78 minutes to deny Chelsea a third spot and help the other west Londoners draw level with Reading at the bottom of the table on 13 points with only their second Premier League win. QPR narrowed the gap to 17th-placed Southampton to five points with 17 matches left.

“They worked their socks off and they got their rewards, we deserved it and it was a fantastic performance. We restricted them,” QPR boss Harry Redknapp told the BBC.

“They have set the standard tonight and to get out of this mess they have to do it every week.”

Chelsea, with a game in hand on leaders Manchester United and third-placed Tottenham Hotspur, has 38 points from 20 matches and trails the table-toppers by 14 points and Spurs by one.

Visitors QPR took advantage of a weaker Chelsea side, interim manager Rafael Benitez opting to rest Juan Mata and Eden Hazard, as they won their first away game of the season to delight their ecstatic supporters at the final whistle.

Chelsea dominated possession and nearly broke the deadlock midway through the second half when Frank Lampard had a goal disallowed for being offside as he fired in a low shot.

Branislav Ivanovic grazed the crossbar with a header after halftime as Chelsea pushed for an opener, but QPR was well organized and defended doggedly and took their chance when it came.

Adel Taarabt always looked lively and it was a well-controlled layoff from the Moroccan, which set up winger Wright-Phillips on the edge of the box to drive a fierce low effort beyond reserve goalkeeper Ross Turnbull.

Wright-Phillips spent three inconsistent years at Chelsea between 2005 and 2008 and his career has stuttered since, prompting him to lose his England squad place.

Redknapp said his club’s shock win at Chelsea could attract new players to sign for the bottom side and help turn their Premier League season around.

“[After that result] people suddenly think maybe they do have a chance. Maybe it would be nice to go there and help get them out of the mess they’re in .?.?. Let’s be up for the challenge,” Redknapp told reporters on Wednesday.

A stunning second-half strike from outside the box by Shaun Wright-Phillips sealed QPR’s first away victory of the season and marked the first time they have beaten Chelsea at Stamford Bridge since 1986.

“I can’t remember having many better wins than this one. To come here tonight against Chelsea who are absolutely flying at the moment .?.?. It was a great result for us,” Redknapp said.

“Yeah, we can turn it around. If I can get this lot working, and we’re looking to improve the squad in the window, we’ll give ourselves a chance and tonight has proved that.”

Redknapp said QPR had been close to signing Liverpool’s Joe Cole before Wednesday’s match only for his former midfielder to opt for his ex-club West Ham United at the last minute.

“He probably looked here and thought, ‘Harry I love you but I don’t think you’re going to stay up,’ so he’s gone to the Hammers,” added Redknapp, who has made a career out of relegation escapes.

Chelsea manager Benitez said his players had looked tired and off the pace after a fine run of form.

“You could see some players were a little tired .?.?. We were not precise in possession, we were not passing the ball with the accuracy and the high tempo we were expecting,” he said.