Son of abductee presses the North

Son of abductee presses the North 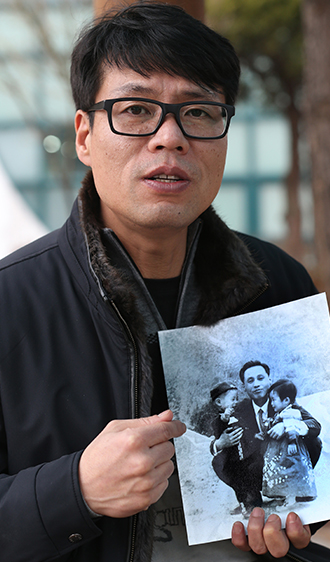 Hwang In-cheol holds a photograph of his father, Hwang Won, holding him and his cousin. It was taken in the spring of 1969, the year that Hwang Won was abducted to North Korea. [JoongAng Ilbo]

In December 1969, a Korean Air flight from Gangneung, Gangwon, to Seoul was hijacked by a North Korean agent about 25 minutes after takeoff. Fifty people were taken to North Korea and only 39 returned. Four flight attendants and seven passengers never came back.

Forty-three years have passed and the incident has somewhat faded from the country’s memory. However, the incident is still very much in the present for Hwang In-cheol. His father, Hwang Won, who was 32 years old, is one of the passengers who never came back.

With his father gone, Hwang’s family lived in poverty. His father’s employer handled his absence as a conditional leave and paid just six months of wages. His wife suffered from paranoia and a personality disorder from the shock of the loss.

In 2001, Hwang In-cheol decided to take the matter into his own hands. That was when he saw Seong Kyeong-hui, one of the kidnapped flight attendants, at the reunion of the separated families.

“I thought my father could return alive too,” Hwang said. “Looking at my little daughter, my heart aches - how much my father must have missed me and home.”

Hwang gathered as much information as he could and met the survivors.

“Although Korean society has forgotten the incident, I live that day everyday.”

One survivor, Park Myeong-won, told Hwang about how he met Hwang’s father in the North.

“He refuted the communist theories during the ideology education session we got. He didn’t quail at the threat that they would kill him.

Hwang visited the Ministry of Unification and the families of the abducted. However, the Korean government did little and most people were indifferent. In early 2010, he learned that there was a working-level group within the UN Human Rights Council that handles forced and involuntary disappearances.

Hwang submitted the case to the council and was able to receive an answer from North Korea in a year and a half:

“This incident is unrelated to forced disappearance. So it is not something that the working-level group of the UN on forced and involuntary disappearances should care about. It has nothing to do with humanitarian acts,” the North said in a statement.

“The fact that I even got this answer is a step forward in itself,” Hwang said.

Eleven years after Hwang started his mission, he’s gotten more support - university students he met while he toured all over the country since October 2011 are among the signatories of a petition to get back the 11 abducted back in 1969.

With the students, he formed a support group for all those abducted to the North.

“The abduction of the people on the KAL flight is the only unsettled incident among abduction cases of private flights worldwide,” Hwang said. “North Korea cannot stay silent.”