Stuck in the middle, large companies stick together

Stuck in the middle, large companies stick together 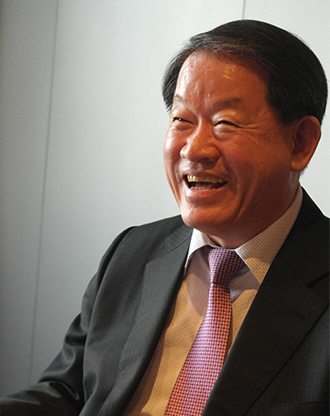 Sempio Food, Hansae, Hanssem, Hyungji, Halim, Kiturami and Humax are companies that may not be leading conglomerates like Samsung or Hyundai, but they all have a substantial foothold in their respective business areas ranging from food to furniture to digital components.

Some 50 CEOs of such companies late last month gathered in downtown Seoul to launch a forum of their own. The participants shared their know-how and expertise.

Kang, who majored in business management at Korea University and earned his master’s degree in accounting at Georgia State University, bought Shin Young, which was on the brink of bankruptcy, in 1999 and has turned it into a company with an annual revenue of 800 billion won ($752 million).

The first-time chairman was faced with the limits of a business that is larger than SMEs but smaller than conglomerates when he tried to close a contract with a Canadian automotive parts developer in 2008 when the global crisis emerged.

To expand on production facilities he tried to get a 30 billion won loan, but banks were not too enthusiastic in lending that amount of money as the nation was being sucked into a worldwide crisis.

The banks were conservative in offering loans especially to a company that was no longer categorized as an SME. It took him more than two months to finally get the loan that he needed after strongly appealing to the government and banks.

He said at the time he realized that there was no future for such companies unless there was an organization that would support them to expand in the global market.

It was then that he decided to discuss the issue with the Ministry of Knowledge Economy. The forum was a direct result. Currently there are 70 or so companies willing to take part.

“It is my dream to create an economic Hallyu by raising 30 or so of such companies like ours as Psy’s ‘Gangnam Style’ did for the cultural sector,” Kang said.

“For this goal to be achieved such companies like ours should make efforts on their part while the government and the political community support the cause.”

First he said a financial institution that exclusively provides support for such companies should be created.

“As of end of last year there are 1,420 companies that are smaller than conglomerates but larger than SMEs with a combined revenue exceeding 373 trillion won,” Kang said.

“If you take 300 or so companies and invest 10 billion won each the cost would be 3 trillion won. If only 10 percent or 30 companies succeeded [in expanding abroad] the revenue that they create could grow substantially and contribute largely to the economy.”