Rolling back of tax benefits leads to big freeze

Rolling back of tax benefits leads to big freeze 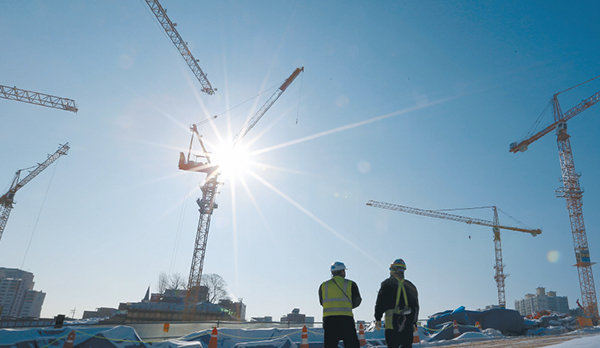 The real estate market has frozen up much like the weather this winter as the government failed to extend tax cuts on property transactions that were due to expire on Jan. 1. They were first implemented in late September.

The higher rates and lingering uncertainties in the market are now discouraging potential buyers and making short- and long-term rentals more attractive. However, it is also expected to add pressure to this already saturated market.

Furthermore, the impact of the nation’s prolonged real estate slump is already causing negative side effects in other industries. More realtors are being forced to close and major builders are finding it harder to repay their debts.

The ruling Saenuri Party was aiming to extend the tax benefits into 2013 but it met with strong opposition from local governments concerned about shrinking tax revenue. 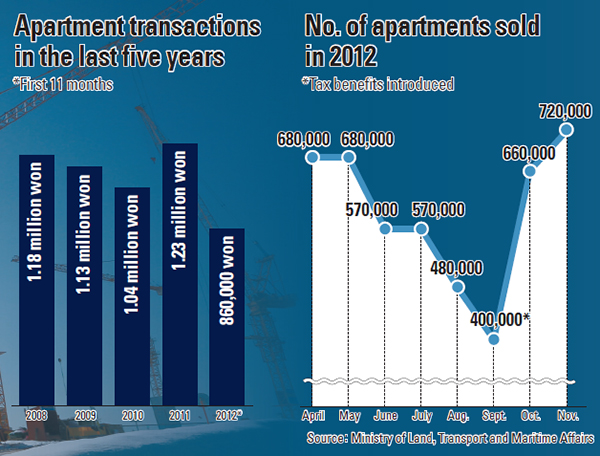 “We haven’t had any calls asking if there are any apartments for sale since the turn of the year,” said a realtor in Jamsil, southeastern Seoul. “We were getting calls from potential buyers until Dec. 31 as they had high hopes that the tax benefits would be extended. But now we’re only fielding inquiries about rentals.”

In hope of revitalizing the market and easing the situation for those considered “house poor,” the government unveiled numerous tax benefits in early fall, including exemptions on capital gains taxes for apartments bought last year and lower acquisition taxes.

House poor refers to people who are living beyond their means because they are forced to spend a huge chunk of their income on mortgage payments, property taxes and other home-ownership costs, leaving them with barely enough discretionary income to get by.

As a result of the government’s measures, the acquisition tax on apartments worth less than 900 million won ($846,180) was lowered from 2 percent to 1 percent, while the rate for houses worth between 1.2 billion won and 900 million won was halved to 2 percent. More expensive properties had to pay 3 percent instead of 4 percent.

The market immediately responded to the changes, with transactions surging 66.8 percent in October. In that month alone, more than 660,000 housing units were sold. In November, on-monthly growth slowed to 8.5 percent but demand was still huge with 720,000 apartments traded.

The figure for December has yet to be announced.

With the rate returning to its previous level, apartment values have already begun to fall this year, local realtors say.

According to Budongsan 114, a real estate information Web site, apartment prices in the Seoul area dipped 0.02 percent in the first week of this month. It said that since February 2011, apartment prices in the capital have been falling for 22 months. Some apartments in Seoul, including those in wealthy Apgujeong, have lost as much as 60 million won in value in just a month.

In contrast, jeonse prices, or long-term deposits that are fully redeemed at the end of the contract and which replace monthly rent, rose 0.01 percent in the first week of January. Budongsan 114 estimates that those who are due to renew their contract this month must pay an extra 30 million won on average compared to two years ago. Such contracts usually run for two years. The researcher said the burden will not be as severe as it was in 2011, when jeonse prices spiked by more than 12 percent due to supply shortages.

Ham Young-jin, head of Budongsan 114’s research center, said that unless the incoming government moves fast to stimulate the market, it will be impossible to revive it even if the tax benefits are fully restored.

The sluggish market could also force another round of corporate restructuring among construction companies this year.

“If the current slump in the local construction market continues, at least seven builders will be put under a debt workout scheme this year,” said Be Moon-seong, an analyst at Korea Ratings, a local credit ratings agency.
Already, 21 of the country’s top 100 builders are under such programs.

In 2010, creditors revamped dozens of ailing builders by ending its financial support for seven of them and rescheduling debt-repayment schemes as they suffered from cash crunches due to the number of unsold homes.

Constructors are already taking steps to find new sources of revenue outside the country. Samsung C&T recently reorganized its departments by integrating local marketing departments into a broader global unit.

“The situation in the local market is much worse than we expected,” said an official at Samsung C&T. “We’re reorganizing our business portfolio by increasing our overseas projects.”

Daewoo E&C is also stepping up its overseas businesses. Last year, it relocated its overseas sales department to its plant department and launched a new division to focus exclusively on nuclear power plants.

Looking for a way out

Saenuri Party officials last week said they will take affirmative action to thaw out the frozen real estate situation. Its revitalization was a key campaign promise made by President-elect Park Geun-hye. Moreover, Lee Hahn-koo, the party’s floor leader, said last week there was an urgent need to extend the acquisition tax cut and that his party will bring the issue to the National Assembly this month.

“[Extending the lower acquisition tax] is essential to normalize the market,” Lee said.

Local governments stand as the biggest obstacle right now due to their opposition to the move, as a yearlong extension would cost them 2.9 trillion won in lost tax revenue.

Many market insiders doubt the issue will be resolved this month. Even if the Assembly agrees to extend the cut, it will not be implemented until the end of next month.

“For the first two months of this year, the real estate market will probably find itself stuck in a situation where all trading has ground to a halt,” said one local realtor.