RG3 goes down as Seahawks rally

RG3 goes down as Seahawks rally 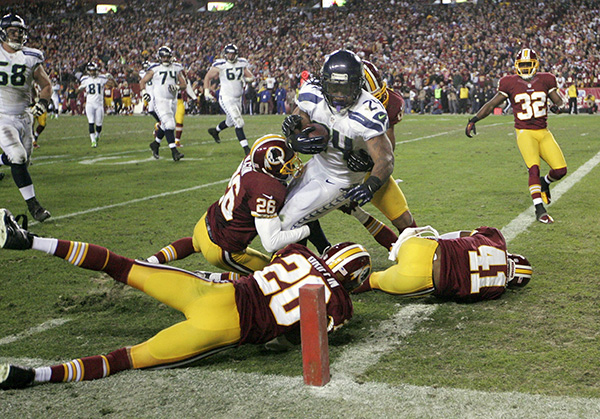 
The stellar rookie seasons of quarterbacks Andrew Luck and Robert Griffin III came to an end on Sunday as the Indianapolis Colts and Washington Redskins respectively lost in the NFL wild-card playoffs.

The only remaining rookie quarterback in the playoffs is Russell Wilson, who teamed with Marshawn Lynch to guide the Seattle Seahawks to a 24-14 comeback win over Washington.

“It was a tremendous game,” Wilson said. “We were fortunate enough to come out with a win. It was a battle, we kept playing. One play at a time, that’s what I kept telling the guys.”

The Seahawks overcame a 14-0 first-quarter hole - their biggest deficit this season - and will visit the top-seeded Atlanta Falcons next Sunday. Seattle has a six-game winning streak, and ended the stigma that it couldn’t win on the road in the playoffs; it had lost the previous eight away games in the postseason.

“It was a huge win,” Wilson said, “and we’re excited about the opportunities.”

In Baltimore, Ray Lewis and the Ravens eliminated No.1 draft pick Luck and the Indianapolis Colts with a 24-9 win. The victory delayed Lewis’ retirement for at least another week as Baltimore heads to top-seeded Denver next Saturday.

“I knew how it started, but I never knew how it would end here in Baltimore,” said Lewis, who played his final home game. “To go the way it did today, I wouldn’t change nothing.”

The other playoff games next weekend are Green Bay at San Francisco on Saturday, and Houston at New England on Sunday.

The Packers set up the showdown with the 49ers after beating the Minnesota Vikings in the wild-card round Saturday. The teams met in the season opener, a 30-22 victory by San Francisco.

Houston gets another chance against New England after beating Cincinnati 19-13 on Saturday in quarterback Matt Schaub’s first postseason start. The AFC East champion Patriots trounced the Texans 42-14 at Foxborough on Dec. 10, the first of three losses in four games for Houston to end the regular season.

Griffin did not finish the game against Seattle, buckling his right knee as he tried to collect a bad shotgun snap. That left the Redskins an offseason to worry about their quarterback’s fitness.

Griffin was playing in his third game since spraining his right knee about a month ago against Baltimore, and he had been looking proppy since tumbling backward following an ill-advised sidearm throw.