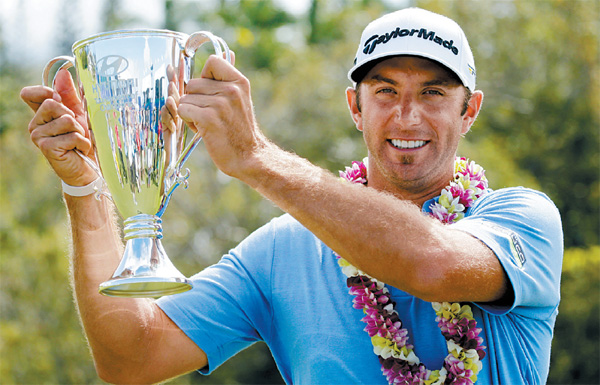 Dustin Johnson poses for photographers with the trophy after winning the Tournament of Champions PGA Tour golf tournament, Tuesday, in Kapalua, Hawaii. [AP/YONHAP]


KAPALUA, Hawaii - Dustin Johnson disappeared into a small valley of bushes and high grass as he searched for another errant tee shot, this one costing him a double bogey and making the final round of the Tournament of Champions far more exciting than he needed it to be.

Undaunted by his mistakes or the thought of blowing a big lead, he blasted driver on the next hole despite the potential for more trouble. This one was pure, rolling back off the front of the green. Johnson chipped in from 50 feet for eagle and he was on his way.

Such a wild sequence - double bogey-eagle - is par for the course for this big-hitting American.

And it was only appropriate that this weird, windy start to the PGA Tour season would end Tuesday with such a wild ride. Johnson had a five-shot lead after seven holes. His lead was down to one shot with five holes to play. He wound up closing with a 5-under 68 for a four-shot victory over defending champion Steve Stricker.

“It was nowhere near ho-hum,” Johnson said.

The winners-only tournament didn’t start until the fourth day because of gusts that topped 40 miles an hour, forcing officials to shorten it to 54 holes. Once it finally got under way, it was over in 29 hours. Perhaps it was only fitting that a tournament delayed by a powerful wind was won by a guy who overpowered the Plantation Course at Kapalua.

“It definitely got close out there today,” Johnson said. “Sometimes I hit a couple of bad drives, but I was always able to bounce back and do what I needed to do to stay out front.”

He never felt truly in command until the final two holes, which are downhill. Paulina Gretzky, the daughter of hockey great Wayne Gretzky, was spotted with Johnson all week and watched from the gallery as he finished without drama at 16-under 203.

Johnson won for the sixth straight season since leaving college at Coastal Carolina, the longest streak since Tiger Woods won in 14 straight years. Only Phil Mickelson (nine) has a longer active streak of most consecutive years with a PGA Tour win.

“It looks like very little fear in him,” Stricker said. “Because he’ll hit one a little crooked, but he’ll pull out that driver again and try it again. And he pulled it off, especially at 14. That was the deciding shot and chip for the tournament. Expect a lot of good things as he continues his career.”

And don’t expect it to ever be dull.

Johnson has all the tools for greatness, though his decision-making remains open to criticism. Instead of hitting an iron off the 13th tee - it’s tough to get it close to the pin even with a short iron - he went with driver and invited all sorts of trouble. Remember, this is the guy who lost a three-shot lead in the final round of the U.S. Open at Pebble Beach by rushing through wild shots in a round of 82. He lost a shot at another major by not realizing he was in a bunker on the last hole at Whistling Straits.

“I’ve done it enough times that it doesn’t really bother me anymore,” Johnson said. “I’ve been in this situation enough now and I’ve made enough double bogeys in my life. You know, it’s just another hole, and you’ve got a lot more holes to go where you can make it up. Fortunately, today I made a double and then the next hole I made eagle. That definitely was the turning point of the day, because walking off 13, I was like, ‘Oh, no, here it goes again.’

“But I came right back, focused and hit two great shots.”

Johnson also added a peculiar footnote to his record. He now has won the last three PGA Tour events reduced to 54 holes because of weather - rain at Pebble Beach in 2009, a hurricane at The Barclays in 2011 and gusts that topped 40 mph in Hawaii from a freak weather pattern that led to a bizarre season opener.

Stricker put up a good fight on one good leg. He has been feeling a shooting pain down his left side on every shot and limped his way around the most mountainous course on tour for 54 holes in two days. He closed with a 69.