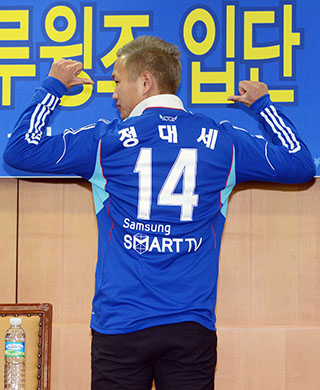 Suwon Samsung Bluewings in the top-flight K League Classic announced that Jong has inked a three-year contract. Financial terms were not disclosed, though sources have said his annual salary is around 300 million won ($282,900).

According to Suwon, Jong will wear No. 14 on the back of his uniform. It’s the number that Seo Jung-won, the current Suwon head coach, had during his All-Star playing career.

Jong, 28, has left 1. FC Koln in the second-division German league to become the fourth North Korean to play pro football in South Korea. He arrived here on Tuesday and went through medical tests before finalizing his transfer. Suwon shelled out 300,000 euros ($391,500) for the transfer fee.

After landing in South Korea Tuesday, Jong said his goal was to score 15 goals and help Suwon win the championship.

Born in Japan to a South Korean father and a North Korean mother, Jong attended pro-North Korean schools there and has said in previous interviews that he considers himself North Korean.

He arrived in South Korea with a single-entry South Korean passport. Jong expressed his desire to serve as “an ambassador” for sporting exchange between the South and the North.

After receiving his Suwon uniform yesterday, Jong said he is willing to put the team ahead of any individual accomplishments.

“I am mostly a forward, but if my head coach wants me to play elsewhere, I will do that,” he said.

“The team gave me the number worn by coach Seo. I realized that this team has high expectations of me, and I am going to work hard to live up to them.”

Jong had first expressed interest in the top South Korean league in November last year. Officials of Suwon and another K League Classic club, Ulsan Hyundai Tigers, said Jong’s agent contacted them with an eye on playing in the 2013 season.

Suwon was close to acquiring Jong last month at around 200,000 euros for the transfer fee, but then Daejeon Citizen, a third K League Classic team, stepped up and offered to pay more money to bring the North Korean star on board. Yonhap