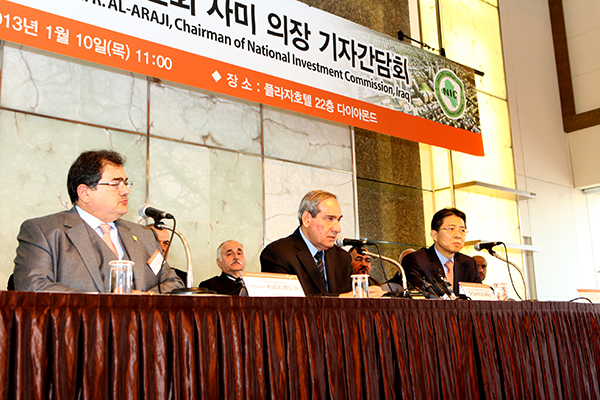 Sami R. Al-Araji, chairman of the National Investment Commission in Iraq, center, speaks during a press conference at the Plaza Hotel in central Seoul yesterday. Provided by the company

The Baghdad-born chairman, who is visiting Korea with 14 members of his technical committee, said Iraq’s reconstruction projects will be worth up to $1 trillion over the next decade. He said he hopes Hanwha Engineering and Construction’s recent deal will encourage other local players to follow suit.

Hanwha hit the jackpot last May after signing a $7.75 billion deal with the NIC to build a new city. Better known as the Bismayah New City Project (BNCP), the deal is the single-largest overseas construction project ever won by a Korean company.

“Many Korean companies can see the Hanwha deal as a stepping stone,” said Al-Araji during a press conference at the Plaza Hotel in central Seoul. ”We would like to welcome other Korean companies with expertise to participate in the project.”

The chairman said the reconstruction work will be spread over two five-year plans, one from 2013 to 2017 and the other from 2018 to 2022. For the first five years, Iraq will grant projects worth a total of $300 billion, including new refinery plants and electricity facilities and factory upgrades. It will also build one million houses.

“Iraq hopefully in 2017 will be exporting six million barrels of oil,” he said. “There are immense and diversified projects that can hopefully put Iraq back where it was.”

As for security, Al-Araji said 16 to 20 Korean companies already have offices there and are managing without any significant problems.

“Iraq today is stable and secure,” he said. “I won’t say it’s a comfortable place to work, but I know Koreans are accustomed to working in all kinds of environments.”

The Korean government is also willing to support such deals. The Korea Trade-Investment Promotion Agency on Wednesday signed a strategic partnership agreement with NIC and will hold a business forum in April.

“The problem for Korean companies to do business in Iraq is financing,” said Kim Hyun-myung, Korea’s ambassador to Iraq. “The government’s role is to create greater trust and credibility between the two sides.”

Meanwhile, Al-Araji said the NIC is talking about extending its business ties with Hanwha, one of Korea’s top 10 conglomerates.

Hanwha E&C has already been handed full responsibility for the design, supply and construction of the city for a seven-year period. At 1,830 hectares (4,522 acres), the city located 10 kilometers (6.2 miles) southeast of Baghdad will contain 100,000 houses. It requires new infrastructure, including roads and water and sewage facilities.

“We discussed building several power plants, refineries, and also talked about insurance cooperation,” he said. “Hanwha is in a privileged position, and it has already earned the respect of the Iraqi people.”

Al-Araji, who holds a doctorate in mechanical engineering, said the absence of Hanwha Group Chairman Kim Seung-youn would not affect the group’s business dealings in Iraq.

Kim was sentenced last August to four years in prison and given a 5.1 billion won ($4.5 million) fine for embezzlement and breach of trust. The 61-year-old tycoon is currently hospitalized after the Seoul Central District Court agreed on Tuesday to release him from prison until March 7 for health reasons.

“We’re very sorry about the incident and we wish him well,” Al-Araji said. “Our relationship will not be affected because there is a commitment from Hanwha Group and the Korean government.”

Hanwha E&C said all plans are running on schedule and it is currently building a base camp where 26,000 workers can reside. Its BNCP unit will move to Iraq in March, while the official construction of houses will begin in December.