Rough seas ahead as liners fish for buyers

Rough seas ahead as liners fish for buyers 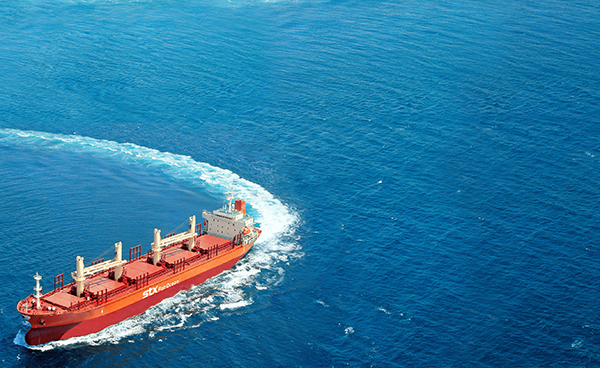 Doubt has been growing since the start of the year about whether Korea’s two biggest bulk liners can be sold at this time due to the struggling marine shipping industry.

STX Pan Ocean and Korea Line Corporation (KLC) are now both up for sale in the merger and acquisition market after suffering financial troubles. They both hope to find new owners in the first half, but this may be wishful thinking.

In terms of operating fleet size, STX Pan Ocean is the No. 3 and KLC the No. 4 maritime logistics companies in Korea, after Hanjin Shipping and Hyundai Merchant Marine.

Both have been going through hard times recently following the slump in the industry. The Baltic Dry Index (BDI), the daily average of prices to ship raw materials issued by the London-based Baltic Exchange, has dropped to one-fourth of where it was in 2010.

But some analysts say the doom and gloom in the marine shipping industry may be a good reason to snap up the companies now at a cheaper price, then cash in when it bounces back after hitting rock bottom this year.

“It looks as though the oversupply of vessels in the marine shipping industry is likely to be solved this year as ship orders have plunged” Uhm Kyung-ah, an analyst at Shinyoung Securities, said. “If the price is not set too high, the two companies have many factors that make them attractive to buyers.”

KLC is moving ahead faster with its M&A process. After appointing Deloitte Anjin, an accounting firm, to manage the M&A process and selecting law firm BLK as an adviser, the company received a letter of intent from five buyers, including conglomerates SK and CJ, last month. The other three bidders are Dong-A Tanker, a local shipping company, Han & Company, a private equity firm, and Zenith Partners, a shipping finance service provider.

The KLC is planning a capital?increase?by?issuing?new?stocks and hopes those bidders acquire the stocks at the appropriate price. According to KLC, five bidders will go through due diligence and will enter official bidding on Jan. 21. The final deal is expected to be completed in late March after selecting a priority negotiator.

Meanwhile, STX Pan Ocean recently appointed Morgan Stanley and Standard Chartered Bank to manage the process, and is ready to send an information memorandum to potential buyers no later than this month.

The exact schedule of its M&A process has yet to revealed, but it will reportedly be done in a limited competitive bidding with candidates offering their price for 36.09 percent of STX Pan Ocean’s share (7.43 million stocks). This is currently owned by other affiliates of STX Group. The value of the stake is estimated to be worth around 310 billion won ($291 million).

Industry insiders speculate that sales of KLC will be completed more easily than STX Pan Ocean as the debt size is small. The debt payable for KLC is about 1.6 trillion won, roughly one-third of STX Pan Ocean. They also evaluated that KLC’s financial healthiness must have been improved after undergoing a court-managed workout program since 2011.

For the sale of KLC, SK and CJ are the favorites as their size and ability to cobble together the necessary funds are better than the other three competitors.

SK Group, the nation’s No. 3 conglomerate in terms of total assets, has SK Shipping under its wing and will try to become the top bulk carrier, while CJ believes the acquisition of KLC will generate a strong synergy effect with CJ Korea Express, the nation’s largest logistics firm.

Moreover, the nation’s 14th-largest conglomerate said on Monday it has decided to merge with CJ Korea Express and CJ GLS, hoping to reinforce its competitiveness in the logistics business.

In contrast, no company has so far shown interest in buying STX Pan Ocean, raising doubts about whether it can pull off a successful M&A.

“The sale of STX Pan Ocean will take some time,” STX Group Chairman Kang Duk-soo said last week after a meeting with the Korea Chamber of Commerce.

There were rumors that Hyundai Glovis, Samsung SDS, GS and Posco may bid to acquire the marine shipping unit of STX Group, but neither company has yet expressed such an intention. Negative sentiment about foreign players could deter them from throwing their hats in the ring.