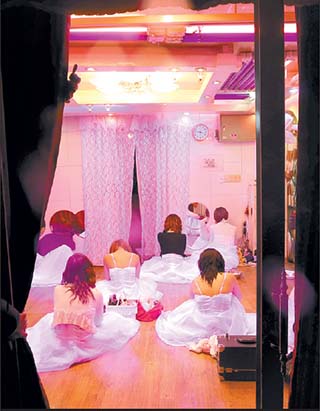 A Seoul court has asked the Constitutional Court to review the constitutionality of an anti-prostitution law.

The Seoul Northern District Court said Wednesday it accepted the request of a 41-year-old woman, surnamed Kim, for the legal examination of a law which punishes women for prostitution and referred the case to the Constitutional Court for judgment.

The current Special Law on Sex Trade punishes women who provide sexual services in exchange for money as well as customers for up to one year in prison or a 3 million won ($2,829) fine.

If found guilty of coercing women to provide sex against their will, operators of brothels could face up to a 10-year prison term or 100 million won penalty under the current law.

The indicted Kim, who faces charges of providing prostitution in exchange for 130,000 won in July of last year in Dongdaemun District, central Seoul, submitted a petition to a court claiming the current law on sex trade infringes upon her rights of self-determination and equal rights.

In accepting Kim’s petition, Judge Oh Won-chan, who referred the case to the Constitutional Court, said, “providing sex in exchange for money is still a private matter” and it is “impossible to clearly know that sexual activity in the form of trade between two adult parties that is agreed upon brings grave harm to social norms.”

The judge said it is “justified to fully ban the sex trade in the country” but added the current law that subjects prostituted women to legal punishment is “against the guaranteeing of people’s fundamental rights.”

Judge Oh, however, did not question the constitutionality of punishing prostitution brokers and customers as it was not included in the indicted woman’s request for review.

The special law was put into effect in 2004 against the backdrop of an incident in brothels in a red-light district in Gunsan, North Jeolla, in 2002, when a fire killed 14 women who were locked inside brothels, sparking a public outcry.

Anyone who is found providing sex for money can receive jail time and fines, but the law exempts those who are deemed coerced to provide prostitution against their will from punishment as they are viewed as victims, which Kim, the petitioner, claims violates her equal rights.

“This is the first verdict that recognizes punishing women caught for sex trade [which the two parties agreed on] could be in violation of the constitutional laws,” said a court official, who spoke on the condition of anonymity.

“The request for the legal interpretation has significance in that it intends to protect the fundamental rights of those women in the underground industry.”

Cho Bae-sook, who proposed the special sex trade law nine years ago during her stint as a now-defunct Uri Party lawmaker, said there should be no change in the nine-year-old special law.

“If we do not punish women in the sex business out of respect for their self-determination, another controversy on the principle of equity could rise as only customers and brothel operators would face punishment.”

As Seoul’s district court accepted the request for a review, the court’s deliberation on Kim’s indictment charge is delayed until the Constitutional Court’s judgment on the case.