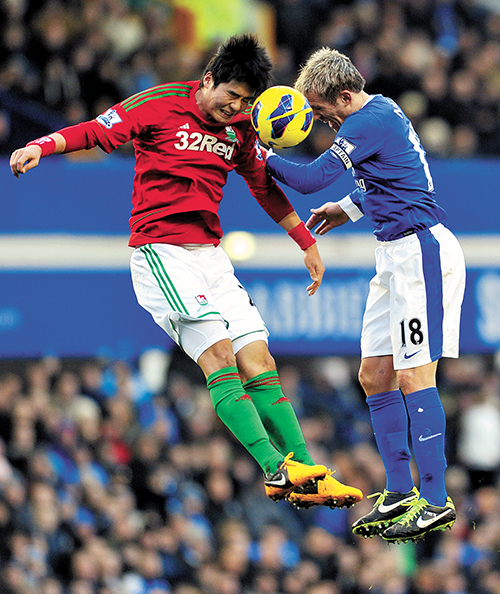 LONDON - Two own goals by Stoke City forward Jonathan Walters sent Chelsea on the way to a 4-0 Premier League victory on Saturday that gave under-fire interim manager Rafael Benitez some respite and lifted his side into third place.

In other matches, fifth-placed Everton and Swansea battled to a goalless draw at Goodison Park, as did Norwich City and Newcastle United at Carrow Road. Sunderland thumped West Ham United, 3-0, at the Stadium of Light.

Fulham drew, 1-1, at home to Wigan, with Franco Di Santo’s equalizer lifting the visitors out of the relegation places, ahead of Aston Villa on goal difference.

Walters had a nightmare afternoon at Britannia Stadium, with a diving header into his own net at the stroke of halftime and beating Stoke keeper Asmir Begovic again with a header from a corner just past the hour. He also missed a late penalty kick.

Stoke has not beaten Chelsea in the league since 1975, and Frank Lampard’s penalty and a fine Eden Hazard goal put the Londoners one point ahead of fourth-place Tottenham Hotspur, who drew, 0-0, at Queens Park Rangers in the lunchtime kickoff.

QPR manager Harry Redknapp had to be content with a point in his first game against his former club Tottenham Hotspur.

Redknapp, sacked by Tottenham in June, hailed a “fantastic” performance from his side as they stifled their opponents for long periods.

Chelsea moved within four points of City, and 11 behind United, after getting a helping hand - or head - at Stoke, normally ferocious opponents on home turf.

Amid growing discontent among Chelsea fans still seething at the Spaniard’s appointment and his team’s inconsistent performances, Benitez said the atmosphere on the squad was good.

In their previous two games, Chelsea suffered a shock home league defeat by QPR followed by a midweek loss to Swansea City in the first leg of the Capital One (League) Cup semi-final at Stamford Bridge.

“We are working very hard, the players are happy; you can see they are enjoying playing football,” Benitez told Sky Sports.

Chelsea also got a boost on Saturday with the return to first-team action of captain John Terry after two months out with a knee injury.

Terry replaced Juan Mata after 79 minutes, although he did concede the late penalty that Walters struck against the top of the bar.

Reading gave its fans hope it can stay up with an unlikely win over West Brom at the Madejski Stadium.

Until the 82nd minute they had been run ragged by on-loan striker Lukaku, but Jimmy Kebe started a memorable comeback. Adam Le Fondre then equalised from the penalty spot with two minutes to go before Pavel Pogrebnyak pounced in the last minute.

“We were really resilient. We have got great character,” said Reading manager Brian McDermott.

The main talking point at Villa Park surrounded Lambert’s 34th minute penalty, which earned Southampton the three points. Enda Stevens was penalized for bringing down Jay Rodriguez and both managers agreeing the decision was harsh.

“Stevens was not even close to him and that is the most hurtful thing. I think referee Mark Halsey will be embarrassed by that,” said Villa boss Paul Lambert.

His opposite number, Nigel Adkins, agreed, saying: “For me there is no contact with the player, but the referee has a decision to make.

“All we can do at our place is make sure the players are not diving.”