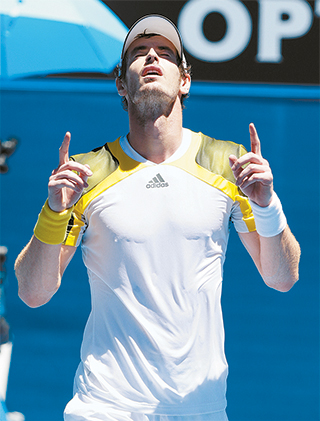 Britain’s Andy Murray celebrates after defeating Robin Haase of the Netherlands 6-3, 6-1, 6-3 in their first round match at the Australian Open tennis championship in Melbourne, Australia, Tuesday. [AP/YONHAP]

MELBOURNE, Australia - In his first Grand Slam match as a major winner, third-ranked Andy Murray opened his Australian Open campaign with a 6-3, 6-1, 6-3 win over Robin Haase of the Netherlands on Tuesday.

Asked what it felt like to play after his triumph at the U.S. Open, where he became the first British man since 1936 to win a major title, Murray said, “I can try and focus on the second part of my career now.”

The 25-year-old Murray seemed more at ease and relaxed at Melbourne Park than he has been in previous trips.

“It was a good start, nice to win in straight sets,” he said. “It was the hottest day we’ve had for a while so the court was playing much quicker.” After a record heat wave early last week, the last few days in Melbourne have been cool. The temperature was heading toward 29 degrees Celsius (84 degrees Fahrenheit) when Murray was at Rod Laver Arena.

It’s been 12 months since Murray started working with eight-time major winner Ivan Lendl as coach, and he attributes much of the success in his breakthrough 2012 to the partnership.

It’s relaxed “in front of the cameras, yeah,” Murray joked. “Behind closed doors he works me very hard.

“We’ve had a very good relationship so far. He’s very honest, very open. He doesn’t lie to you, he tells you exactly how it is and that’s exactly what I needed.”

Novak Djokovic started his bid for a third consecutive Australian title on Monday with a 6-2, 6-4, 7-5 win over Paul-Henri Mathieu.

“Hello, everybody, it’s great to be back,” he told the big crowd after his first match at Melbourne Park since his epic five-set win over Rafael Nadal in last year’s final. “I have great memories.’’

Federer, who is drawn to face Murray in the semifinals, with Novak Djokovic lurking as a potential final opponent, also showed little mercy in his 6-2, 6-4, 6-1 win over Frenchman Benoit Paire.

It was a typically sumptuous performance from the popular Swiss, who is bidding to become the first man since Roy Emerson in the 1960s to win five Australian Open titles.

“I’m happy, he’s a good player, good talent and I have not played a match this season yet so I wasn’t sure and that’s why you’re relieved when you’re through the first one,” Federer said.

In women’s events, Serena Williams suffered a major injury scare just minutes into her bid for a calendar-year Grand Slam Tuesday. Williams, gunning for the first sweep of all four major titles in the same year since 1988, was on court for only 19 minutes against Edina Gallovits-Hall before going over heavily on her right ankle.

However, after medical treatment and despite hobbling around the court, the 15-time Grand Slam-winner astonishingly won 6-0, 6-0 in just 54 minutes as she belted every winner in sight to limit her running to a minimum.

Afterwards, the 31-year-old said she felt pain and swelling and may need an X-ray, but pledged to soldier on in her quest for a sixth title at the year’s first Grand Slam.

“Oh, I’ll be out there. I mean, unless something fatal happens to me, there’s no way I’m not going to be competing,” she said. “I’m alive. My heart’s beating. I’ll be fine.”

Any lasting injury to the hot favorite could throw the women’s draw wide open. AP, AFP