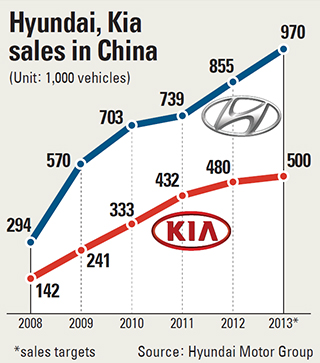 Hyundai Motor Group announced yesterday it aims to sell 1.47 million vehicles in China this year and expand its market share in the world’s largest auto market.

China became Hyundai’s biggest market after 1.33 million units were sold last year. The automaker saw 14.2 percent growth in its China sales in 2012 after Hyundai sold 856,000 units and Kia 480,000 units. Last year’s sales were the third-best performance after Volkswagen, which sold 2.6 million units in China, and General Motors with 1.44 million units.

Global automakers are looking to China to drive revenues amid weakness elsewhere, and that includes Hyundai. According to a report from the Korea International Trade Association (KITA), China’s market is predicted to have 9.4 percent on-year growth with 16.57 million vehicles to be sold, remaining the worlds’ biggest market.

KITA said that the U.S. will likely post a modest 3.5 percent growth in car sales this year with 14.8 million vehicles expected to be sold, down from an 11.9 percent jump in the previous year. A government-led stimulus plans can boost the demand, but there are few new models to fuel consumption, added KITA.

Europe is expected to make a slight turnaround in 2013 to climb 0.2 percent on-year to 14.2 million vehicles from a 7.2 percent slump in 2012, the association said.

Passenger car sales in China were recently hit by limits by some Chinese cities to ease traffic congestion and cut pollution, but Hyundai still foresees growth.

However, the company said that competition in China will be fiercer than ever as other carmakers release new models.

The Chinese government is trying to encourage purchases of smaller, more fuel-efficient vehicles. GM, Nissan and Mercedes-Benz have launched lower-priced Chinese models, while Fiat and Chrysler Group announced yesterday that one Jeep model will be produced in China in association with Guangzhou Automobile Group.

Hyundai is one of the carmakers that have earned market share as Chinese consumers shunned Japanese cars after Tokyo purchased islands in the East China Sea that are also claimed by Beijing, sparking nationwide protests.

Hyundai Motor, which completed its third Chinese factory last year, said that sales of a new Santa Fe will be important this year. The mid-size SUV was released last month and the automaker hopes the model will raise its premium brand image.

As for Kia Motors, the company said that increasing production will be the key to meeting its sales target. Currently, the company’s two plants in China can produce 440,000 vehicles a year.