When an antique isn’t quite what it seems

When an antique isn’t quite what it seems 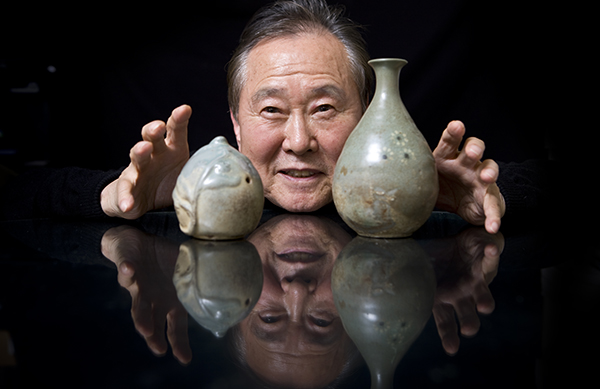 Kim Dae-ha, the director of the Research Center for Appraisal of Korea’s Ancient Art, displays a real piece of celadon and a fake. The one on the right is a 13th-century celadon jar with chrysanthemum patterns, and the one on the left is an ink dropper made by spraying ground white clay on the surface and baking it in a kiln. [JoongAng Ilbo]

In 1992, as interest in antique art was picking up, a high-profile case involving a national treasure shocked the country.

After the Navy discovered a gun in the waters off Hansan Island near Tongyeong, South Gyeongsang, it claimed the weapon was once attached to the legendary Geobukseon (Turtle Ship) of Adm. Yi Sun-shin (1545-98) that played a key role during the period of attempted Japanese invasions known as the Imjin War (1592-98).

Not long after, the government designated the gun as National Treasure No. 274.

But four years later, it admitted the gun, in fact, had no relation to the Geobukseon and revoked its status as a treasure. Cultural heritage authorities were left scrambling for an explanation, though many experts outside of the government were not surprised by the turn of events.

“Scholars who study ancient art had doubts about it in the first place,” said Kim Dae-ha, the director of the Research Center for Appraisal of Korea’s Ancient Art. “Among other reasons, a notorious and professional forger was on board the vessel that led the discovery. The case shows the danger of fake cultural properties.”

Kim, 75, is one of only a few experts in Korea who specialize in solving cases of misidentified and forged cultural properties. For the past 40 years, he has been deeply involved in ancient art and recently compiled stories of such cases in a book titled “The Thousand and One Nights of Antiques.”

It includes high-profile cases including the gun found near Hansan Island in 1992, a piece of white porcelain from China’s Southern Song Dynasty (1127-1279) and the case of the golden crown.

When Kim entered the antiques business in the mid-1960s, he had little knowledge about what was real and what was fake. His failure to distinguish real from fake once cost his family a lot of money and nearly led him to bankruptcy. So he had no choice but to buckle down and learn.

“I read all foreign books on art appraisal I could find for five to six years,” he explained. “After that, I felt like I could finally see what I needed to. Besides the traditional appraisal methods that involve the five senses, these days all kinds of scientific and high-tech methods are used with microscopes, endoscopes and carbon dating.”

Kim’s area of expertise is ceramics. He taught at Kyonggi University’s Graduate School of Traditional Arts for 10 years and also published a book called “Theory and Practice of Appraisal of Ancient Art” in 2009.

Kim explained that until the 1960s - which was when Buncheong ware was rolling into every antique store - there weren’t many fake antiques.

Buncheong is a kind of ceramic produced during the first 200 years of the Joseon Dynasty and known for a relatively coarse gray body in various shapes and a green-tinted, semitranslucent glaze.

And as time passed and more ceramics were discovered, there were fewer pieces out there to be discovered. In the meantime, demand for them has spiked as more people have become interested in antiques.

With demand outpacing supply, more and more ceramics disguised as antiques have hit the market.

Con artists have resorted to strange methods in order to make ceramics look older than they should. One particularly unusual technique involves dropping new ceramics into the sea or oyster beds and leaving them there for a year. When removed, the surface is worn and may have shells attached. The pieces are then sold as if they originate from China’s Song Dynasty (960-1279).

“Before the ’90s, most of the forged cultural properties were manufactured within South Korea,” Kim said. “But since then, many of them have been made in North Korea or China because costs of manpower and manufacturing were just too high in South Korea. So I guess you could say China is no longer ‘the treasure trove of antiques.’?”

And as appraisal methods have grown more sophisticated, so have con artists and their methods of forgery and misrepresentation.

“When you look at fake ceramics today, there are some manipulation methods that you’ve never seen before,” Kim noted. “For instance, one had ground white clay sprayed on the surface, which made it look like it was corroded. That is why these days we not only need experts in ancient art, but also in other fields to distinguish forged cultural properties from the real deal.”