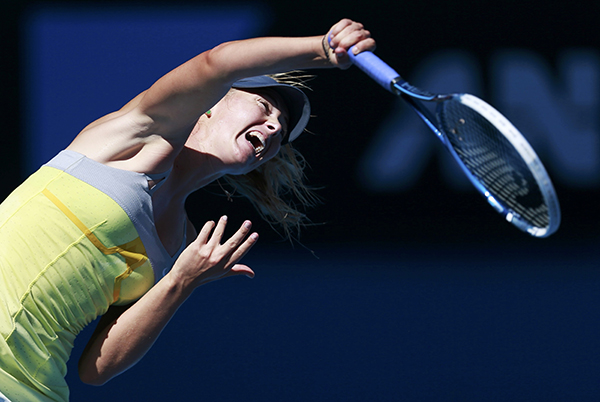 Maria Sharapova of Russia serves to Kirsten Flipkens of Belgium during their women’s singles match at the Australian Open tennis tournament in Melbourne, Australia, yesterday. Sharapova won 6-1, 6-0, cruising to the quarterfinals. [REUTERS/YONHAP]

The No. 2-ranked Sharapova conceded only five games in her first four matches, a record at the season’s first major.

“Well I’m certainly happy to be playing this well but .?.?. it only gets tougher from here,” said Sharapova, who is playing her first tournament of 2013 after not playing an exhibition match in Korea and a warm-up event at Brisbane because of an injured right collarbone.

The reigning French Open champion is showing no signs of trouble with the collarbone in Melbourne.

Steffi Graf conceded only eight games in her opening four matches here in 1989, when she won the second of her three straight Australian Open titles. Monica Seles matched that mark.

Sharapova has been even more dominant. She started with a pair of 6-0, 6-0 wins - the first time that has happened at a major since 1985 - and then beat seven-time Grand Slam winner Venus Williams 6-1, 6-3 in the third round.

She next plays fellow Russian Ekaterina Makarova, who ousted fifth-seeded Angelique Kerber 7-5, 6-4. Sharapova beat Makarova in the quarterfinals here last year on her way to the final.

“I really want to play against Maria because I lost here last year,” Makarova said. “Now I’m pretty confident, and I like my game.

“Last year I was so surprised .?.?. and I had so many thoughts in my mind. This year, I’m a little bit used to it, so I think I’ll be ready to play a good game.”

No. 19-seeded Makarova took out the highest seed to tumble so far at the season’s first major, causing another fourth-round surprise like she did here last year with an upset win over Serena Williams.

Kerber and Makarova were two of only four women in 2012 to beat Williams, who lost only one match in the second half of last season as she collected titles at Wimbledon, the London Olympics, the U.S. Open and the WTA Championships.

“Seems like it was the same this year and last year. Unbelievable feeling,” Makarova said. “I really like to play here. The crowd is so perfect.”

In the first men’s match yesterday, fourth-seeded David Ferrer had a 6-2, 6-1, 6-4 win over No. 16 Kei Nishikori of Japan to reach the quarterfinals, where he will meet Spaniard Nicolas Almagro.

Nishikori had won two of his previous three matches with Ferrer and was a quarterfinalist in Australia last year, but struggled with 65 unforced errors in the two-hour, 10-minute match.

Almagro advanced later that day, leading 6-2, 5-1 when No. 8 Janko Tipsaveric retired from their fourth-round match.

It will be the first all-Spanish quarterfinal at the Australian Open since 2011, when Ferrer ended Rafael Nadal’s bid for a sequence of four consecutive major titles.

No. 1-ranked Novak Djokovic, who has the past two Australian titles, had a night match against No. 15 Stanislas Wawrinka.

On Saturday night, No. 2-ranked Roger Federer knocked Bernard Tomic out of the tournament to end Australia’s participation in the singles.